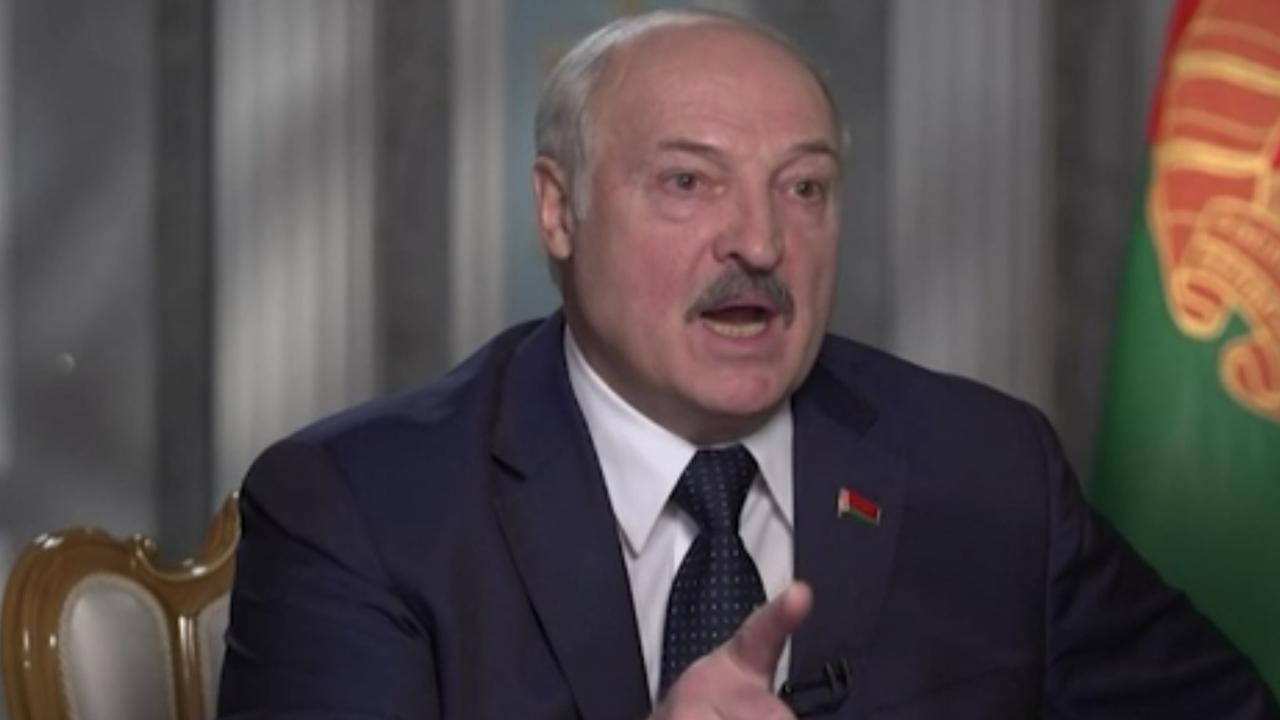 The man described as “the last dictator of Europe” has torn strips off a reporter after a wave of horrific human rights accusations.

The man dubbed “the last dictator of Europe” has fired off in a bizarre TV interview, refusing to apologise after being accused of a string of human rights violations.

In a CNN interview with journalist Matthew Chance, Belaus’ leader Alexander Lukashenko asked his questioner “do you take me for a madman?”

Belarus, once part of the Soviet Union, is a country of 10 million people that lies between Poland and Russia. Lukashenko is close to Russian President Vladimir Putin.

In May, the world was shocked when a plane from low cost carrier Ryanair overflying Belarus was forced to land in the capital Minsk whereupon a government critic was arrested.

While Lukashenko is adamant he safely won power in 2020, officials in the US, EU and inside the Belarusian opposition have continued to challenge his legitimacy.

An estimated 25,000 opponents of the 67-year-old president have been detained since the election. According to local human rights watchdog Viasna, at least 1000 people were detained across Belarus in a single day on November 16 last year as a result of mass demonstrations against the leader.

The death of one protester, 31-year-old Roman Bondarenko, sparked even more pushback for Lukashenko’s resignation after 26 years in power.

Leader says ‘torture chambers’ no worse than US, UK

According to his family, the ex-military man and painter was beaten at Minsk’s central police department during a protest and succumbed to his injuries in hospital the following day.

Amnesty International has spoken out against detention centres in Belarus “becoming torture chambers”, where protesters are reportedly forced to lie in the dirt, stripped naked and subjected to various degrees of police brutality.

When quizzed on alleged detention centres for political opponents, Lukashenko refused to accept he was doing anything worse than seen in the UK or US. He later dismissed the human rights organisations on his tail as “dubious”.

“We don‘t have a single detention centre, as you say, like Guantanamo, or those bases that the United States and your country created in Eastern Europe,” he told CNN’s Matthew Chance.

“So I think if you take this into account – one learns by comparison, hence my answer to your question – I don’t think you will come out looking any better. As regards our own detention centres, where we keep those accused or those under investigation, they are no worse than in Britain or the United States. I can guarantee you that.”

Belarusian Association of Journalists claims as many as 23 journalists have been detained by authorities while covering protest movements in Minsk and other cities in the nation.

Former presidential candidate Svetlana Tikhanovskaya described Mr Bondarenko as hero who was killed “by accomplices of the regime,” urging the need for Belarusians to continue protesting peacefully.

“He was an innocent victim of an inhumane system that considers people‘s lives to be the cost of power,” Ms Tikhanovskaya said on Telegram. ”We all understand that any peaceful person could have ended up in his place.

“Like millions of Belarusians, I sympathise with Roman’s family. We will not forgive this murder. We will write the name of Roman in the history of the new Belarus as the name of a hero.”

‘Do you take me for a madman?’

Lukashenko has also under fire from the neighbouring Polish government, accusing him of forcing refugees towards their border and in some cases giving them amphetamines in order to keep them awake in the cold weather.

Lukashenko, however, strongly denied claims he was “weaponising” migrants against countries critical of his rule. When asked if his offloading of migrants was a retaliation against European sanctions, the 67-year-old spat back at the US interviewer, constantly comparing his country to the superpower abroad.

“This is madness,” he said. “Are you taking me for a madman?

“Can you prove the fact that I decided to take revenge on the European Union? My country is in Central Europe, and it is a small one. Only 210,000 square kilometres? Nothing like the United States. Can 10 million people dictate terms to half a billion?

“There are half a billion people living in the European Union. Am I mad? I don‘t think you take me for a madman, otherwise you wouldn’t have come here. So I’m not going to take revenge on anyone.

“Only weak people care about revenge, and pardon my immodesty, but I don‘t consider myself a weakling. And I don’t believe it necessary to take revenge on the European Union. I’m not going to. Revenge is more your country’s style,” he said referring to Mr Change being from the UK.

“Why did you leave the European Union? Because you needed revenge, but I don’t.”

On the streets of the capital Minsk, the atmosphere remains tense. While Lukashenko remains adamant the recent political turmoil hasn’t affected daily life, reports from the ground paint a different picture.

“This is Belarus,” one young man told CNN. ”The police can arrest you and me.”

Putin has remained a strong supporter of Lukashenko in recent months, with the northern superpower offering diplomatic and financial support.

Lukashenko, however, denies he has made any big promises to Putin despite now housing military bases, radar stations and a joint air combat training centre inside Belarusian borders.

“We are fraternal nations,” he said. “We come from the same origin, Russians and Belarusians. We are no different, inside and out. We have a common policy and common goals … We don’t need promises.”