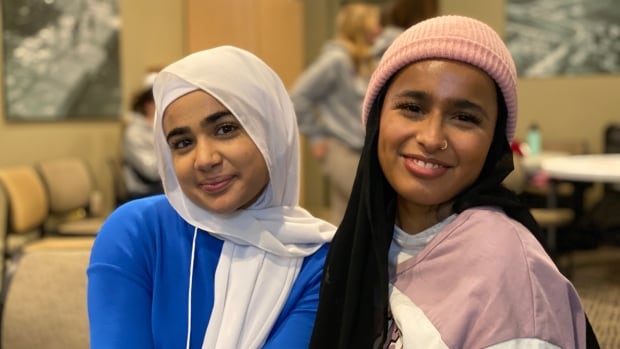 ‘Be the teacher I wish I had’: These aspiring Ontario teachers hope to diversify the field


Atiyeh Ahmed has always been eager to pursue teaching as a career, but didn’t think she could do it.

It wasn’t because she doubted her intellectual ability, it was because the brown, visibly-Muslim teen had never met a teacher who looked like her. So, it was hard to imagine herself in those shoes.

But that changed this week for the Grade 12 Waterloo, Ont., student.

On Tuesday, she finally saw the representation she was longing for at a Wilfrid Laurier University “Teacher Diversity” event, and that was her final push to pursue her dream.

“I want to be there for students the way I wish my teachers were there for me and I want to be able to understand their different backgrounds and be the teacher I wish I had,” Ahmed told CBC News.

“I really want to become a teacher because I really want to see myself represented in the school system and I think it changes everything because  … if a student sees a teacher that looks like them, then they can think it’s a possibility for them,” she added.

Ahmed is considering English, French and Business as teachable subjects.

She was among 50 equity-deserving students from across high schools in Waterloo region who were invited to the school’s campus for an event hosted by the university’s Equity, Diversity and Indigenization Coalition.

It connected students curious about teaching to current educators and teacher candidates from diverse and intersectional backgrounds.

Ardavan Eizadirad, co-lead of the coalition and an assistant professor in the Faculty of Education, said the event also aimed to bring awareness to the need for more diverse teachers on a local, provincial and national level.

“We felt this was something that was identified as a gap and we wanted to take action,” he said.

Currently in Waterloo region, the majority of elementary and high school teachers don’t reflect the rich diversity of the communities they serve, according to workforce surveys by the public and Catholic school boards.

According to a 2019 report from the Waterloo Region District School Board, 92 per cent of employees are white, while census data shows that number to be 80 per cent for the general population.

About five per cent of school staff identified as members of the LGBTQ2S+ community, and about seven per cent said they lived with a mental health disability or condition.

For the Waterloo Catholic District School Board, a 2021 report suggested 89 per cent of staff are white and seven per cent of employees are living with a disability.

Why representation is key

Grade 11 student Jadon Cottei-Leo told CBC he wants to be a teacher because he wants young people to see successful people of colour and know they can achieve that too.

Charis Campbell has also never had a teacher of colour like herself.

“I think it’s a disparity that’s really sad for a lot of students of colour,” she said.

“There’s so much labour going into explaining your experiences and explaining why you feel the way you feel and what’s happening against you. And it’s just so much of a relief when a person just gets it immediately, when somebody just understands because they’ve been through it,” she added.

She worries that systemic barriers discourage diverse people from considering the profession.

“Those opportunities are not presented to people of colour,” she said. She hopes that’ll change through events such as the one at the university this week.

“I’m interested in teaching because honestly, I’m interested in making a difference for people. I want people to not go through the same things I did in school. I want to be a positive light for students,” she said.

A step closer to equity for all

Kaitlyn Chorowiec is in their final year of the education program at Laurier. Soon, they’ll graduate with a hope to become an elementary or high school teacher.

Chorowiec noted they feel hopeful for a better future, especially following the event, where many young students gathered, united over their interest in teaching.

Eizadirad wants young aspiring teachers to know that they’re not alone in what they’re experiencing and that support is there to help guide them through the field.

“I hope students walk away feeling more confident in who they are and who they would like to become, whether that’s a teacher or any other career or even if it’s not pursuing post-secondary, just kind of mapping out where do they want to go and how will they get there,” he said.

“Most importantly, how will they challenge and cope with those barriers that come their way, particularly being from a equity deserving group and facing more systemic barriers,” he added.

Eizadirad said he hopes the event will return on an annual basis.