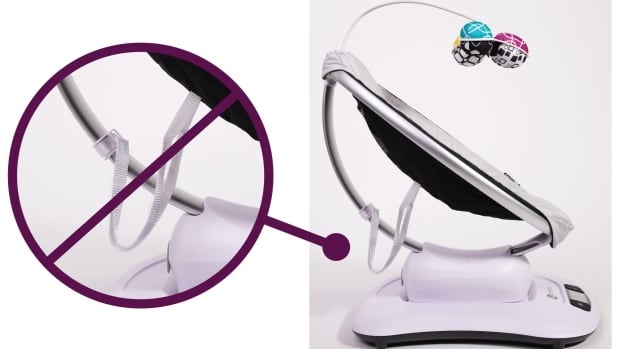 
An American baby gear company is voluntarily recalling 87,000 baby rockers and swings from Canadian retailers after a baby became caught in one of the product’s straps and asphyxiated.

4moms is recalling 77,700 of its MamaRoo Baby Swings and 10,000 of its RockaRoo Baby Rockers due to a strangulation hazard.

There have been two incidents in which babies became entangled in a strap that is affixed to the MamaRoo product.

One 10-month-old died from asphyxiation while another suffered bruising to his neck, according to the United States Consumer Product Safety Commission (CPSC), where two million swings and 220,000 rockers are being recalled.

There were no reported incidents involving the RockaRoo, though the same safety concern applies.

In Canada, the products were sold at retailers buybuy BABY, Amazon, and specialty stores in Quebec, Ontario, British Columbia and Alberta, according to the company’s store locator.

CBC News has reached out to 4moms for a statement.

Health Canada issued the recall jointly with 4Moms and the CPSCon Monday, directing Canadian consumers to contact the company and have a free baby strap fastener sent to them.

“When the swing or rocker is not in use, its restraint straps can dangle below the seat and non-occupant crawling infants can become entangled in the straps, posing a strangulation hazard,” the agency statement said. “This issue does not present a hazard to infants placed in the seat of either product.”

“Additionally, consumers with crawling infants should place the products where children cannot access them when not in use.”

The products are imported by Brands in Motion, a company based in Mississauga, Ont.

Quebec will offer 5th dose of COVID-19 vaccine to all adults as of Aug. 29