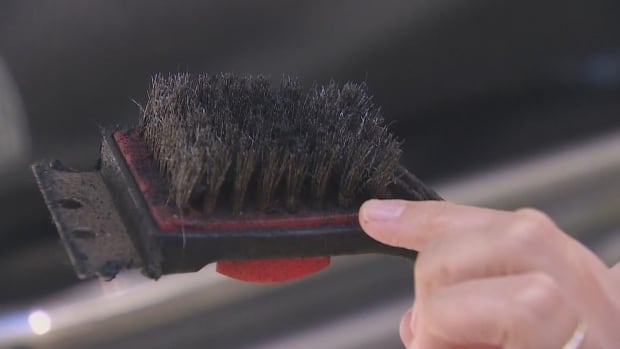 
A B.C. family is warning others of the risks associated with metal bristle barbecue brushes after a five-year-old was taken to the emergency room last weekend after accidentally swallowing a bristle.

Rosemary Higgins’ son had just taken a bite of chicken, fresh off the barbecue, when he started gagging.

“I thought he was choking,” Higgins said.

She grabbed a flashlight and looked into the back of his throat to see what was causing him discomfort. That’s when she saw the metal bristle lodged in his throat, she said.

After an hour, he couldn’t feel it anymore. But the next morning, the bristle was still in his throat. Higgins took her son to the emergency room in a North Vancouver hospital, where a physician was able to remove the bristle without surgery.

“They said they had to get it out, they couldn’t leave it,” Higgins said. “There was huge concern about it getting lodged anywhere in the head, neck, throat and chest.”

Her son is now recovered.

Ian Tait, an advanced care paramedic in Vancouver, says he hasn’t handled any calls about metal barbecue brush bristles that have been swallowed, but he’s heard stories about it.

“It could cause damage in there for sure,” he said.

Tait said anyone who thinks they’ve swallowed a metal bristle and is experiencing issues with breathing or swallowing should call 911.

In 2020, a new national safety standard for barbecue grill brushes was developed, requiring a warning label and testing to reduce the risk of wire bristles becoming detached, embedded in food and accidentally ingested.

Leading up to that, Health Canada received 59 reports of incidents related to barbecue brushes, including 48 injuries, over six years.

Shaqeel Virani, manager at a Home Hardware in Langley, B.C., says metal brushes are still the most popular tool for cleaning barbecue grills, even though there are alternatives such as wooden scrubbers, coil brushes and brushes with wooden bristles.

He said the key to keeping those metal brushes safe is to replace them regularly, and not scrape the grill too hard when cleaning it.

“A lot of people will just go hard at those grills to get everything off,” he said. “We tell people to go lightly over it two or three times.”

He also recommends replacing metal bristle brushes after two to three years to avoid bristles falling out of worn out brushes.

But Jane Hurlburt, Higgins’ mother, said she thinks the brushes should be taken off the market completely.

“They really do pose quite a significant risk of injury,” she told The Early Edition host Stephen Quinn.

Since her grandson swallowed the bristle, she’s gotten rid of her metal brush and wants others to know the risks associated with them.

“It’s just a kind of a word of warning. You hear about it and read about it, but actually getting around to [getting rid of the metal brush], that was something that we hadn’t done and should have.”

No slowdown yet in U.S. inflation, as rate rises to 9.1% in June

‘Biblical’: Why Bali flights could be axed