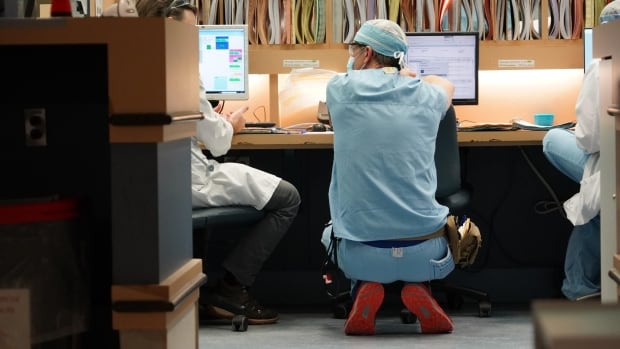 
This story is part of Situation Critical, a series from CBC British Columbia reporting on the barriers people in this province face in accessing timely and appropriate health care.

Dr. Kara Perdue is a family and emergency physician in Clearwater, B.C., the site of the province’s most frequent emergency room closures.

The town’s Dr. Helmcken Memorial Hospital features a four-bed emergency room, trauma bay, and a six-bed acute inpatient care unit. It’s supposed to have eight full-time registered nurses on staff, each working four shifts per week, but the hospital currently only has four.

“They’re coming in on overtime, staying late, coming in early to keep us open as much as we can. So sometimes it’s quite amazing that we’re only closed one to two nights a week given how short-staffed we are,” said Perdue.

Clearwater, with a population of just over 2,000, is about 125 kilometres north of Kamloops.

“At this point, if one person calls in sick, sometimes that’s enough to shut us down.”

Outside of Clearwater, emergency rooms in Merritt, Chetwynd and Port McNeill, a town on northern Vancouver Island, have also faced closures or been put on diversion.

When an ER is put on diversion, patients that walk in are treated on site, while those that arrive in an ambulance are sent to the nearest hospital.

Health professionals across the province say staff shortages can be traced back to a slew of retirements, long-awaited vacation days, and nurses and doctors leaving the industry for good after two backbreaking years.

They warn that as more people leave the health-care sector, the problem of burnout only snowballs, exacerbating the workload of those who remain. They say the pandemic highlighted, rather than created, persistent issues — with ERs bearing the brunt of breakdowns in other areas of health care.

“It means having more in-patient beds so that patients can leave the ER and be physically cared for in other, better-equipped, more specialized areas of the hospital.”

As borne out by repeat closures in Clearwater and Port McNeill, rural hospitals are particularly vulnerable to staff shortages.

Doctors like Perdue divide their time seeing patients between a clinic, maternity ward and long-term care while also working in an emergency room, meaning the shortage of ER doctors goes hand-in-hand with a critical shortage of family doctors in B.C.

“In smaller communities, it’s a more complex issue because it’s a shortage of family doctors there that causes the problem. In those communities, family physicians are wearing five different hats.”

‘We can’t ask any more of our team’

As the staffing crisis continues, ER visits in Clearwater are up. Perdue said the department now averages between 12 and 18 visits a day, an increase from about two to eight visits at the same time a year ago.

“The acuity and severity of illness in most emergency rooms does seem to be higher, and I’m not sure that we know the reason for that,” she said.

In Clearwater, doctors like Perdue work out staffing among themselves, ensuring that if one physician is away, another is there to fill their clinic, maternity or ER shift. If no one is available to fill a given shift, a doctor from outside the community is brought in on a “locum” — a short-term contract to ensure shift coverage.

“There are still some days, even this summer, that we’re still working on recruiting locums and looking at how we can adjust the schedules to make sure that the physician coverage is there,” said Perdue.

“Despite the hard work from all of the team at our hospital and in recruitment, unfortunately, at this point, those closures are inevitable because we can’t ask any more of our team than we already have.”

In a statement, Interior Health said it is actively working to recruit additional staff and said interruptions in the emergency department remain “concerning.”

“Interior Health medical and site leadership in Clearwater are dedicated to doing everything possible to maintain full coverage whenever possible,” the statement read in part.

Dr. Ramneek Dosanjh, the president of Doctors of B.C., said she hopes patients remember that closures are a measure of last resort that doctors and nurses try to avoid at all costs.

“I think there’s a general misunderstanding of the public thinking that we have created this system when we merely work in it, and again, remembering that as humans, the fatigue is real. It is not an easy thing for doctors not to show up or for nurses not to come in,” she said.

Perdue said she doesn’t plan on taking time off this summer, joking that her vacation consists of travelling to Inuvik, in the Northwest Territories, where she works at the local hospital part-time.

Tree falls on home on McClendon Drive in Decatur

Who is eligible for a 4th COVID-19 vaccine dose? A province-by-province breakdown