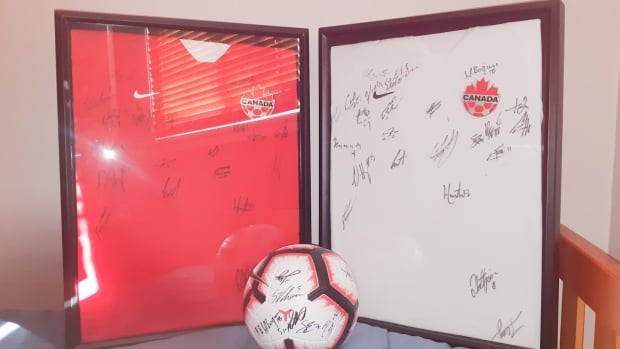 
Canada Soccer has made made good on a promise to a St. John’s fan to thank him for his generosity with a piece of the organization’s history in Newfoundland.

“It’s exactly where I was hoping they were going to be.… They’re certainly going to make it back to the worlds this year as a result of all these wins.”

Canada beat Honduras 2-0 in San Pedro Sula to keep themselves atop the Confederation of North, Central America and Caribbean Association Football standings, one point ahead of the United States, who they match up against on Sunday in Hamilton.

The top three teams of the division automatically qualify for the 2022 FIFA World Cup being played in Qatar in November. Qualifying games end in March.

In late October, Penney returned a piece of history to the club: the first game ball used in the 1985 qualifying match, also against Honduras, played at King George V Park in the east end of St. John’s.

That victory in the fall of 1985 was the first and last time Canada qualified for the World Cup.

Penney said at the time he didn’t want money for his artifact, just a replacement ball from this year’s team to put in the custom-built case he had for his souvenir from the game.

He said he wanted more people to enjoy his game ball and wanted the team to use it as inspiration for this year’s World Cup bid.

The organization sent Penney a new ball for his display case, autographed by this year’s club members. What’s more, the club sent two autographed jerseys — in home and away colours — which Penney placed in shadow boxes to go on display in his shed along with the new ball.

“When they came in the mail, you can imagine my excitement,” Penney said.

Canada has five qualifying matches remaining, the final one on March 30 against Panama.

The last time the team saw World Cup action was in 1986 in Mexico, where it ultimately dropped all three of its matches — 2-0 against the U.S.S.R., 2-0 against Hungary and 1-0 against France.

Glossier lays off a third of its corporate staff