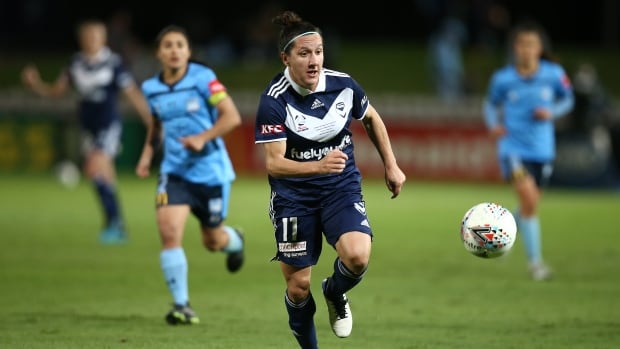 
Soccer authorities in Australia have urged players to make formal complaints in any cases of sexual abuse or misconduct after one of the country’s leading international goal scorers alleged she’d been groomed and harassed by senior players early in her career.

Lisa De Vanna, who played 150 games for Australia and was second on the list of all-time of scorers for the women’s national team with 47 goals, said she first experienced harassment, abuse and bullying in 2001 when she joined a national women’s squad at age 17.

She told Sydney’s Daily Telegraph newspaper she’d been pulled down from behind by a few teammates and “I fought my way off the floor kicking and screaming.”

“They thought it was funny. I was just a young kid from Perth, I didn’t know any different. I… wanted to punch them,” De Vanna said. “As a youngster and a player I didn’t know how to address this… but it is still happening across all levels and it’s time to speak up.”

De Vanna went public with her allegations in the wake of the scandal in the United States, where the National Women’s Soccer League called off games on the weekend and its commissioner quit amid a sexual harassment and misconduct allegations involving a longtime coach.

WATCH | Bring It In panel on how NWSL scandal came to be:

Riley was immediately fired by the Courage, and both FIFA and U.S. Soccer opened investigations into why he was able to continue coaching even after the players brought their concerns to the league. Riley told The Athletic the allegations were “completely untrue.”

De Vanna initially reacted on social media to a tweet from U.S. soccer great Megan Rapinoe, who posted the message “Men protecting men, who are abusing Women” in response to the NWSL scandal.

“Abuse is abuse. Poor behaviour is poor across all boards!”

In the Daily Telegraph story, De Vanna said she’d seen “cultural problems at all levels — from men and women — and girls coming through need to be brave, and also the girls that have been through this also need to be brave and know they are not alone.”

“In any sporting organization and in any environment, grooming, preying and unprofessional behaviour makes me sick.”

De Vanna retired from professional football last month after playing for clubs in Australia, the U.S., England, Sweden and Italy.

Football Australia said it had met with De Vanna and “heard her grievances” but the specific allegation was not raised at the meeting.

The national players’ union, Professional Footballers Australia, said it was “deeply concerned” at the claims.

“We recognize that the decision to speak publicly would not have been made lightly,” the PFA said in a statement. “It is critical that the sport provides a safe and inclusive workplace and, importantly, the players are supported to come forward.”

Greens’ Elizabeth May speaks out after ‘terrible election result’