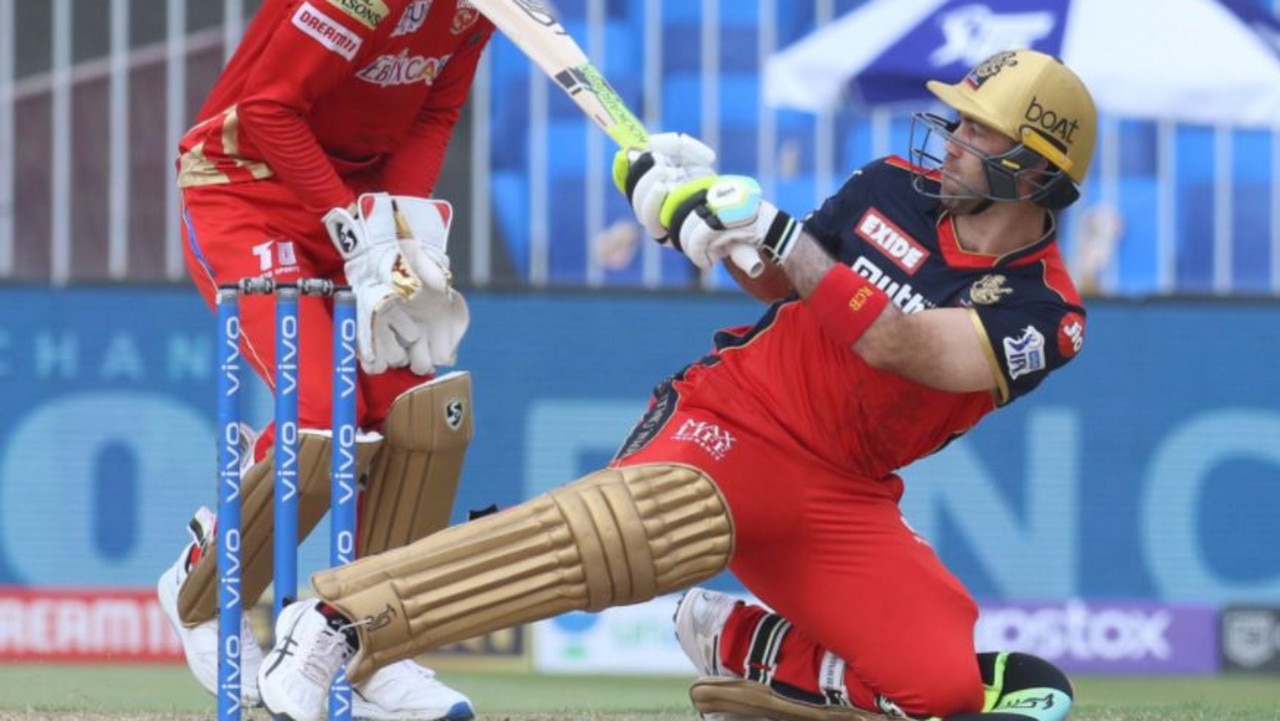 Glenn Maxwell is on fire at the Indian Premier League, but there are huge question marks over the rest of the Australian squad three weeks out from the T20 World Cup opener.

Glenn Maxwell has quadrupled his Indian Premier League output in 2021 after blasting a third consecutive half-century in a positive sign for Australia ahead of the T20 World Cup, with several of his national teammates stuck watching not playing cricket.

One of the few members of the Australian squad actually playing cricket ahead of an October 23 World Cup opener, Maxwell has been outshining the likes of Indian superstar Virat Kohli and South African dynamo Ab de Villiers for Royal Challengers Bangalore.

Maxwell is RCB’s leading run-scorer in the 2021 tournament, having smashed 407 runs with a team high 19 sixes, with scores of 56, 50 not out and now 57 in his past three innings, having batted five times since the competition resumed last month.

It’s a marked turnaround for Maxwell, who managed only 108 runs in 11 innings in the 2020 IPL, when he was playing with the Punjab franchise, who let him go before he was snapped up by RCB to join Kohli and de Villiers in a powerful batting line-up.

Maxwell said he’s found a “nice little rhythm” having been locked in at number four in the batting line-up, coming in ahead of de Villiers.

”It’s something I probably had for Australia over a long period of time as well, which is probably why I have success there,” he said.

“Coming to the RCB, they wanted me to do the exact same role. It’s been really enjoyable to actually come into the change room and actually have to change not too much.”

Maxwell’s success is a high point for an Australian T20 squad at mixed points in preparation for the tournament.

Also in the IPL, Steve Smith has had just two hits for the Delhi Capitals, while Aussie opener David Warner is watching on from the sidelines, having been dropped after just two innings for Sunrisers Hyderabad. All-rounder Marcus Stoinis has spent three games on the sidelines as a result of a hamstring injury and his immediate playing future remains unclear.

Fast bowler Josh Hazlewood has taken six wickets in five games for Chennai, but his attacking partners Mitchell Starc and Pat Cummins are in Australia, bowling only in the nets.

Cummins hasn’t played a game since the IPL was postponed in April, while Starc went on two white-ball tours to the West Indies and Bangladesh, before linking up with the Australian women’s team in Queensland.

Australian captain Aaron Finch is back in the nets after having knee surgery, while the rejigging of the domestic fixture has left keeper Matthew Wade and spinner Mitch Swepson without a game, while Aston Agar and Mitch Marsh have played just a single one one-day match.