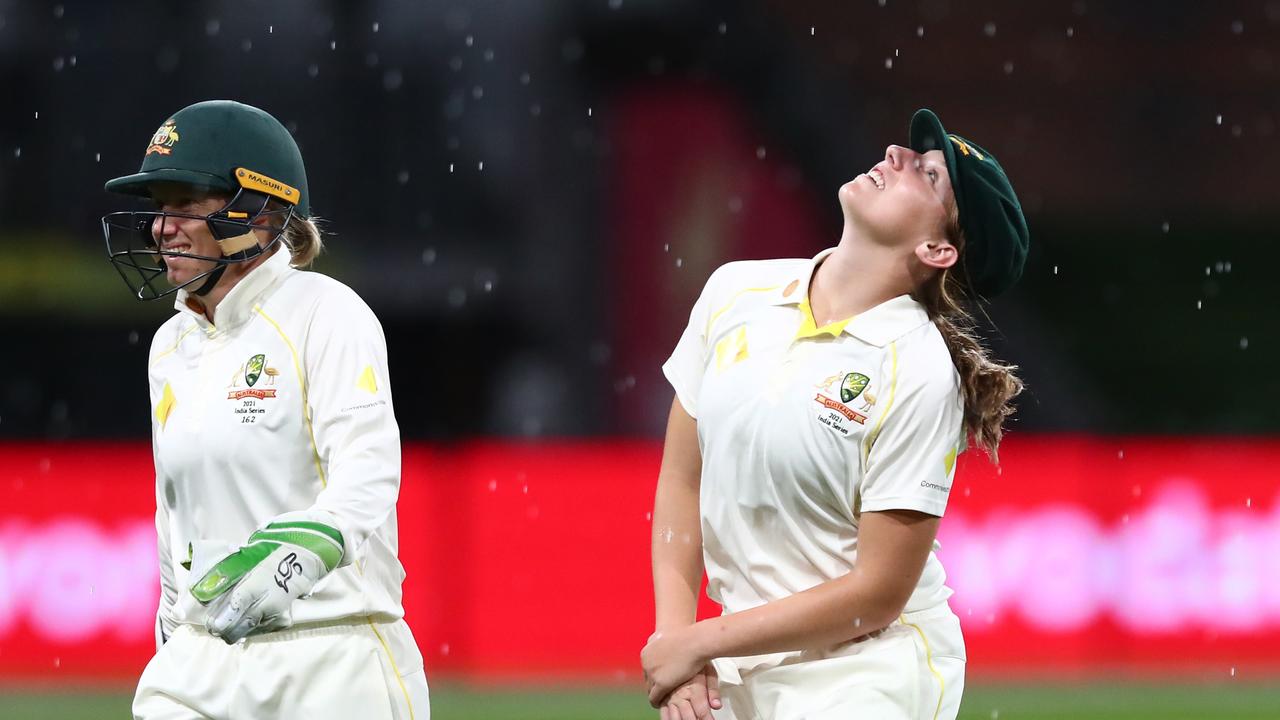 A fierce debate has erupted midway through Australia’s Test against India as pundits accuse women of copping unfair scrutiny.

Day three of the Australian women’s cricket team’s Test match against India sparked plenty of debate over a perceived lack of aggression from the visitors that means a result is looking unlikely as we head into the final day.

Rain caused havoc on the opening two days on the Gold Coast after Australia won the toss and fielded, meaning India was still at the crease when play got underway on day three on Saturday.

Sitting pretty at 5/276, many expected the Indians to be aggressive with the bat and score some quick runs to give themselves a chance of bowling out the Aussies twice to win the game.

However, the tourists were happy to take their time, scoring just 83 runs in more than 40 overs to start the day. They eventually declared at 8/377 after 145 overs and took the new pink ball under lights.

Australia went to stumps at 4/143. Victory is essentially impossible for Meg Lanning’s troops, while the door is only slightly ajar for an Indian win. A draw is the most likely result.

Before we get stuck into what fans are saying about India’s approach, you’ll need to understand the context. Women play plenty of limited overs cricket but hardly any Test matches. Ellyse Perry, who made her international debut in 2007, has played just nine Tests. Lanning debuted in 2011 and has appeared in just four Tests.

Additionally, women’s Tests last four days — not five, like it is for men.

Then there’s the points system for this series. Australia and India played three ODIs before this Test and will play three T20s afterwards. Each team receives two points for a win in a limited overs match, while victory in the Test secures four points. A draw sees both sides receive two points each.

The team with the most points at the end of all seven games will be declared the series winner.

Australia won the first two ODIs and India won the final game, making it four points to two in the Aussies’ favour heading into the Test.

Should India have scored quicker?

One side of the argument when it came to dissecting India’s effort with the bat — and whether it should have scored quicker to increase the chance of a result — is related to the lack of women’s Test cricket being played.

One opinion was if women want to play more Tests, then they have to play more exciting cricket to justify their case.

Former Australian captain Lisa Sthalekar reportedly said in commentary for Channel 7: “If these sides are actually brave and want to see more Test cricket there is an ownership … to try and see if they can move the game forward.”

While speaking to Channel 7 from behind the stumps, Australian wicketkeeper Alyssa Healy also weighed in on the state of play.

“We’ve bowled quite well to be fair, but they don’t really look like they’ve got any sort of intent (to take the game forward) … interesting times!” she said.

Why the answer isn’t so simple

Australian spinner Jess Jonassen is missing this Test because of injury but spoke eloquently about how it’s not just as simple as upping the ante when everyone else thinks you should in the women’s game.

We mentioned Perry and Lanning’s Test experience during lengthy careers, but what about 38-year-old veteran Indian seamer Jhulan Goswami? She’s been playing international cricket since 2002 but has only represented her country in 12 Tests.

Jonassen would have liked to see India take the game on more with the bat but she pointed to this inexperience across long-form cricket as a major reason why that is easier said than done.

“When I’m talking about wanting to see the Indians come out with that little bit more intent — yes the Australians bowled fairly well and made it difficult but there was still a number of deliveries where it probably comes down to the fact that we don’t play as much multi-day cricket,” Jonassen told Sporting News Australia after stumps on day three.

“Being able to effectively move through the gears and understanding what is a high-risk shot in the four-day game compared to just holding up an end. It’s probably just the more cricket, the more Test cricket we’re able to play, the higher those run rates each session and each day will be and understanding the right moments in a game where you need to push.

“The more that we’re able to play longer-format cricket, the more we’ll understand … the right times in a session or in an innings to push or when to absorb the pressure, when to have attacking fields and when to have defensive fields.

“At the moment we’re still learning on the go.”

Jonassen’s points are especially poignant when you consider women don’t have a domestic first-class competition to hone their skills in red or pink ball cricket.

For every person criticising India’s run rate on day three, there were two willing to defend them and call for more investment and opportunities in the women’s game.

Former Indian star Snehal Pradhan doesn’t believe the burden on men to produce exciting cricket in Tests is the same as it is for women.

“Every time there is a women’s Test match, there is this unfair expectation to not only play your best, but to make the game attractive and force a result,” she told the ABC.

“This doesn’t exist for the men.”

Rick Eyre tweeted: “The expectations placed upon these #AusvInd Test teams is absurd when you consider that not just do they not play enough Tests, but they have absolutely no 3-4 day domestic competition to develop their skills in.”

“This discussion comes up every Test — they’re playing a format they’re barely familiar with, this time with zero prep, and then they have the added outside expectation of having to make it a spectacle in order to ‘earn’ more opportunities,” she tweeted.

Many on social media said this Test was a perfect example of why women should play for five days just like men. The inclement weather would make it difficult enough to achieve a result, without needing to cope with a lack of experience in the format.

The points system also came under the microscope. Why would India start batting recklessly and risk losing the match when they can essentially guarantee themselves two points with a draw? And why would Australia risk scoring quickly to chase the target when it could escape with two points of its own?

“Been some seriously cooked takes on this women’s Test match today, even from people who you’d think should know better. Facts are it’s new to a lot of players and nations. Accept it or move along and go support Big Bash.”

Cricket journalist Scott Bailey added: “There is absolutely no reason for Australia to chase this match once India declare.”

One of the reasons India may have batted defensively in the first session was to ensure it didn’t get bowled out early and could attack Australia with a new ball under lights — when the pink ball traditionally seams and swings around more than it does during the day session.

By building its first innings, the tourists were hoping to only bat once and snare a bundle of quick wickets on Saturday night before trying to bowl the Aussies out twice on the final day.

This position was backed up by cricket commentator and podcaster Adam Collins, who also lamented the lack of a fifth day.

“India batting once/big/conservatively is their only meaningful route to victory in a rain-affected match in four days,” he tweeted.

“Bowling Aus out when the lights go on then enforcing the follow-on. The primary issue is the lack of a fifth day, leaving them with this alone.

“The only way they let Aus back in is throwing it away early on day three. Why would they do that? I’m glad they didn’t do that.”