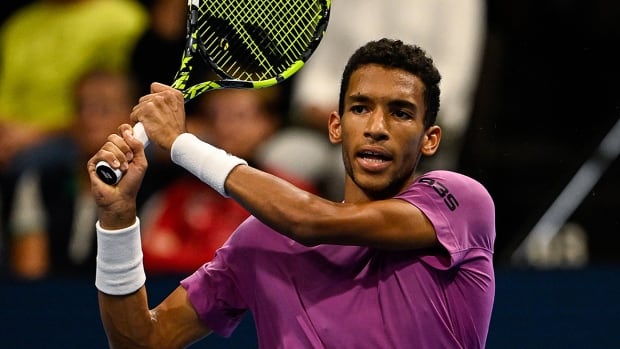 
Canada’s Felix Auger-Aliassime defeated world No. 1 Carlos Alcaraz 6-3, 6-2 to book his ticket to the Swiss Indoors final on Saturday.

It is the second time the Montreal native has defeated Alcaraz since he became the top-ranked player on the ATP circuit. Auger-Aliassime got the best of the 19-year-old Spaniard in a singles match at the Davis Cup on Sept. 16 while competing for Canada.

The 22-year-old fired nine aces without committing a double fault in the match. He also won 82 per cent of his first-serve points while breaking on three of his eight opportunities in the one hour 21-minute match.

“So far it has been very close to perfect,” Auger-Aliassime said of his play in Basel. “I’ve been serving amazing, not getting broken once yet.

“There’s still one match to go, but it’s been a fantastic week, played some great tennis, and again today against the best player in the world.”

Alcaraz finished with zero aces and three double faults and could not convert on his lone break point chance. He won 62 per cent of his first-serve points.

Auger-Aliassime, the third seed in the tournament and No. 9 in the world, will seek his third straight title in Sunday’s final against another 19-year-old, Holger Rune, who downed sixth-seeded Roberto Bautista Agut 7-6 (1), 7-6 (6).

The Canadian entered the tournament having won back-to-back ATP Tour titles in the past two weeks.

Auger-Aliassime speeds into the semis in Switzerland

Montreal’s Felix Auger-Aliassime won his 11th-straight match on Friday, 6-2, 6-3 over Kazakhstan’s Alexander Bublik in the quarter-finals of the Swiss Indoors tournament in Basel.

Canada’s Denis Shapovalov will be moving on to the Vienna Open final after topping Borna Coric 7-6 (4), 6-0.

The Richmond Hill, Ont., native won a blistering 95 per cent of his first-serve points in addition to hitting seven aces.

Shapovalov also broke on three of his four opportunities.

He sent the first set to a tiebreak after continuously tying the match following every game Coric won. The Canadian won the first three points in the final set before Coric came back to win four of the next seven.

Shapovalov won the set with an ace before going on to dominate the second set.

He is now 2-2 in career matchups against Coric, having now won two straight over the Croatian.

The 23-year-old Shapovalov will next face world No. 4 Daniil Medvedev on Sunday for a chance to win his second career title and first this year.

Denis Shapovalov made easy work for himself Friday at the Vienna Open defeating Britain’s Dan Evans 6-3, 6-3.

World No. 1 Iga Swiatek will face American Coco Gauff in a rematch of their French Open final after the pair were drawn in the same group for the round-robin stage of the WTA Finals that begins Monday in Fort Worth, Texas.

Roland Garros and U.S. Open champion Swiatek (21) and Gauff (18) — the two youngest players in the field — were joined in the Tracy Austin Group by Caroline Garcia and Daria Kasatkina following the draw for the season-ending tournament.

Tunisia’s Ons Jabeur, the second-ranked player in the world, topped the Nancy Richey Group in which she was joined by Jessica Pegula, Maria Sakkari and Aryna Sabalenka.

The top two players in each group will progress to the Nov. 6 semifinals, with the final slate for the following day.

Spaniard Garbine Muguruza won the 2021 edition of the WTA Finals in Guadalajara.