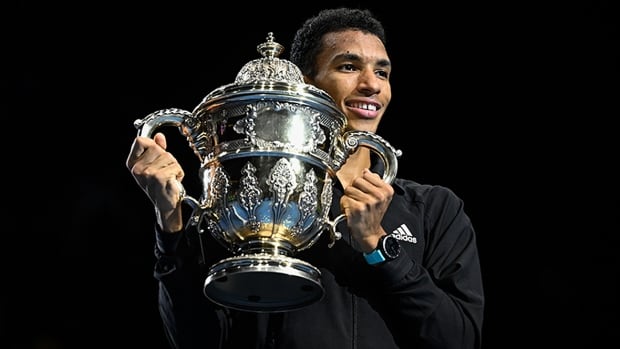 Auger-Aliassime, the third seed in the Basel, Switzerland, tournament and ninth in the world, fired 11 aces and won 78 per cent of his first-serve points.

He also saved all three of Rune’s break point chances while converting on two out of his own five opportunities. The Montreal native went all five matches in the tournament in Basel without giving up a single break point and only dropped one set throughout.

“It’s been an amazing week,” Auger-Aliassime said after the match. “Once again in the final, not getting broken all week. [It’s been] a long year, a long stretch of wins, and it’s not over. So hopefully I can keep going, but right now I’m feeling all the good emotions that come with winning a tournament. It’s amazing.”

The 22-year-old Canadian entered the tournament after winning the Firenze Open and European Open in back-to-back weeks. He is now up to four titles for his career and on the year, having won the Rotterdam Open in February.

Auger-Aliassime improved his career record in finals to 4-9 with all four titles won this year at indoor hard-court events.

He shares the same Aug. 8 birthday with Swiss great Roger Federer who had intended to return to tournament play at his hometown event. Federer announced his retirement last month at age 41 because of persistent knee injuries.

“I actually thought about him this morning, and thought how cool it would be if I win here, where he won 10 times,” Auger-Aliassime said of Federer.

In Austria, Denis Shapovalov of Richmond Hill, Ont., fell short of winning his first title of the year losing 6-4, 3-6, 2-6 to Daniil Medvedev in the Vienna Open final.

Shapovalov won 78 per cent of his first-serve points and broke on three of his nine opportunities. The 23-year-old also fired six aces but committed six double faults in the loss.

Medvedev, the top seed at the tournament and No. 4 in the world, converted on five of his 11 break point chances while winning 72 per cent of his first-serve points.

Canadian Denis Shapovalov took the first set, but would ultimately lose 4-6, 6-3, 6-2 to Russian Daniil Medvedev on Sunday in Austria.

Entering the match, Medvedev had not given up a break point at the event while Shapovalov had only given up two in four matches.

The Canadian is now 2-4 against Medvedev in career matchups. Shapovalov defeated Medvedev the first two times they played but has since lost four straight.

It is the second runner-up finish for Shapovalov within the month. He fell to Yoshihito Nishioka at the Korea Open on Oct. 2.

Despite Sunday’s loss, Shapovalov is set to move up three spots to No. 16 in the ATP rankings.