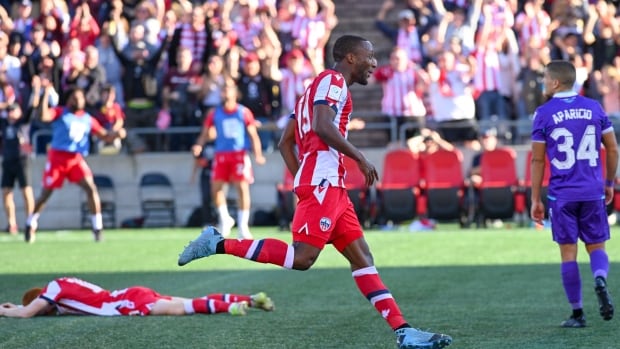 
As Atletico Ottawa prepares for its Sunday evening championship game against Forge FC, team supporters continue to express hope for what a Canadian Premier League championship would mean for soccer in this city in the years to come.

The last time Ottawa came this close to a soccer championship, the team was called the Fury, the league was the North American Soccer League, and the result was a loss to the New York Cosmos, in New York.

But this time around, the final will be played at 6 p.m. ET at home at TD Place thanks to Atletico’s first place finish in the overall CPL standings. For passionate members of the Capital City Supporters Group like Bryce Crossman, home field advantage makes all the difference in the world.

“We’re happy that we made this game. We know the guys are going to give it their all. We’ve got to do the same,” said Crossman.

“We have to be in the crowd, we’ve got to give them as much support as we can because if we can put them over the top, we’re going to. But it’s going to be a great game.”

With more than 10,000 spectators expected to attend the historic game, Crossman wants fans who are new to live soccer to feel welcome and excited about possibly joining a movement.

“You’ll definitely hear us singing and chanting and yelling. We have huge signs at the top. Assigned seating is just a suggestion in our section. If you’re there you’re going to get bumped into and you’re going to hear some colourful language,” he said of Section W, where the supporters group cheers loudly each game.

One of the catalysts of the supporters group, Daniel Duff, said he will always remember this “fairytale season” as he prepares for the final.

“A lot of us are both nervous and filled with excitement at the prospect of coming home with the win on Sunday.,” said Duff.

We know it’s within our grasp, and we also know what we’re up against.”

Fullback and team captain Drew Beckie says he’s excited for his younger Atlético teammates to get to experience a championship crowd.

Duff called the opponent, Forge FC from Hamilton, Ont., the “darling” of the league. The team has made the CPL final in each of the league’s four seasons, winning the championship twice.

Despite finishing first overall and going undefeated in the past 11 games, Atletico head coach Carlos Gonzalez admits his team head into the final as the underdog.

“It’s going to be a special game. We’ve seen how the fan base is increasing and we feel the support of the city and hope they will come here on Sunday and lift us,” said Gonzalez.

“Forge are a great team and they are the favourites, having played four finals in four years, but we will be there with our fans and have a great desire to win.”

Atletico Ottawa and Forge FC have been evenly matched through the three head-to-head matches in 2022 with one win apiece, plus a draw. Historically, Forge has had the better of Ottawa winning seven of 10 matches all-time.