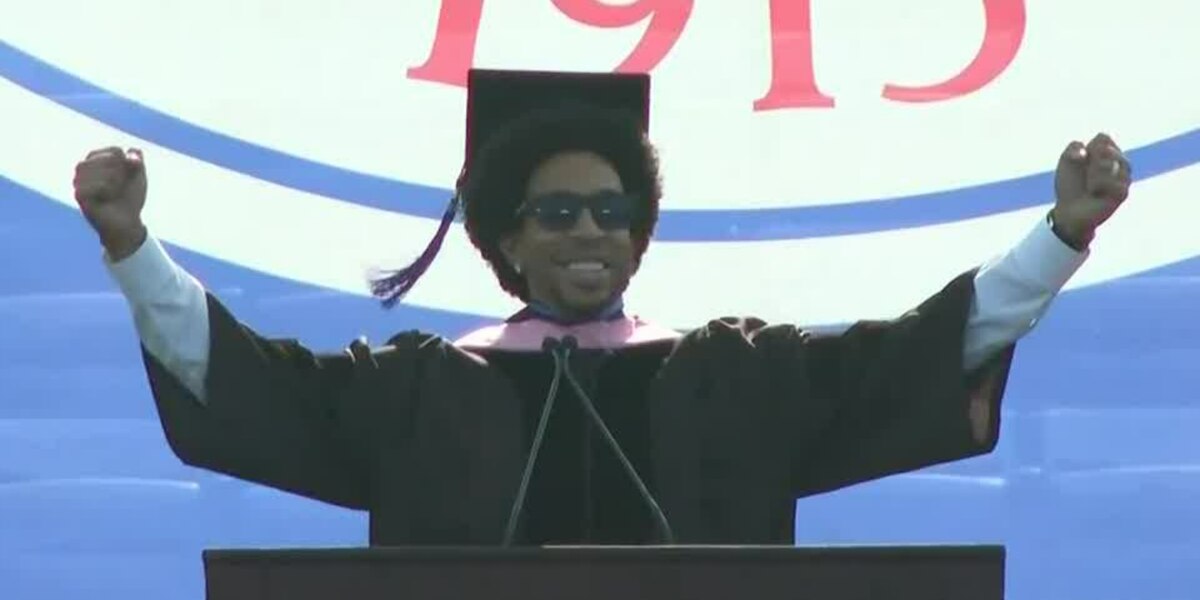 
ATLANTA, Ga. (CBS46) – Grammy award-winning rapper, actor, entertainer and philanthropist Ludacris has had a groundbreaking and successful career. He has broken countless boundaries, destroyed stereotypes and kicked down doors for not only Atlanta rap music, but southern rap music as well.

Ludacris, whose real name is Christopher Brian Bridges, first rose to prominence as a radio DJ, formerly known as Chris “Luva Luva” at Hot 97.5 in Atlanta in the mid-1990s.

The one thing that hasn’t changed in the eyes of CBS46 News Station Manager Micheal Smith is his drive and dedication.

“I first met Chris in early 1996 when I started working for 97.5. He was an intern at the time,” said Smith. “My first impression of him was “hungry.” I used to work weekends and overnights at the radio station. The first intro I did on the radio, I asked if he wanted to do it and he said ‘yes.’ It was on what was called carts and eight tracks. I think the population of people in general will listen to rap music lyrics and make an assumption about the person based on the lyrics. It was always funny to watch people do that about him because he is college educated. Real cool dude, really nice guy. He’s really smart and was never overbearing.”

In June, Walk of Famer and Chair of the Selection Panel Ellen K, announced Ludacris was an honoree to receive a star on the Hollywood Walk of Fame in 2023.

“He was on the front end of the next wave of southern rap music in the late 1990s,” said Smith. “We had our own music scene that wasn’t really respected at one point. We had Raheem, Kilo Ali, Hitman Sammy Sam, Red Money. Then there was the Jermaine Dupri and Goodie Mobb wave. Atlanta music still hadn’t broken until Jermaine broke through. When Outkast cut through, it kicked the door open for not just Atlanta Hip Hop, but southern Hip Hop as well. It was a game-changer. Chris came after that and pushed through when that door was kicked down. The Timbaland collaboration record [Phat Rabbit released in 1998] he did really skyrocketed,” said Smith.

Smith recalls an instance where Ludacris reached out to play one of his first singles one the radio.

“There was a time I had left Hot 97.5 and went to a radio station in Tallahassee. Chris had reached out about this new single and asked me to break it for him on the radio. And he sent me the single which was the first record on his first major label debut album, titled “What’s Your Fantasy.” Then I kept getting blown up about getting this hot record over and over. I took it to the former radio program director and he was like, “this record is not hot.” He thought the only reason I wanted to play it was because it was my friend’s record. I kept saying, “it’s my friend’s record, and it is also hot. Two weeks later, I asked if he had more copies and he said he was signing his record deal with Def Jam and we had to go through the label to get it.”

He signed to Def Jam Records in 1999 to pursue his rap career, making the difficult decision to drop out of Georgia State University where he was studying Music Management. He was the first rapper signed to the new label imprint Def Jam South.

In October 2000, he released his highly anticipated debut album, “Back For the First Time,” which went on to go triple-platinum. He has released eight albums and has sold more than 20 million records in the United States alone. He is widely regarded as one of the best rappers of all time and the most prominent Atlanta rapper of the last 22 years.

“Chris has had a very strong and consistent career,” said Smith. “Some of the stuff that producers [Shondrae and Bangladesh] were doing in the 1990′s were pushing the boundaries. Lyrically, he stands up against some of the greatest.”

The doors that he’s opened are endless, according to popular Hot 107.9 radio personality DJ Incognito. “To watch him take it from a radio personality to be a movie star is a really big deal. The lyrics are underrated. At the time when the south had something to say, he really flew the flag for us at that time. He welcomed the world to the lyricism and creativity of the south. OutKast, Busta Rhymes and Missy Elliot were always creative with their videos. Ludacris had that torch and took it a step further and it happened so fast. He’s so diverse and has so many different talents.”

In 2019, Ludacris partnered with Georgia State University to offer a law class titled, “The Legal Life of Ludacris.” GSU officials said at the time that the course filled up in a matter of minutes.” In May, he received his honorary bachelor’s degree from Georgia State University, even serving as the speaker at the school’s commencement ceremony.

“There are so many other jobs in a music business that you can aspire to and want to so. Chris going back to college and finishing his degree shows people that education is important,” Smith continued. I think if he talks more about the business side of it and how he and his manager Chaka [Zulu] built that business, it will motivate people to want to do more than just be on stage.”

Born in Champagne, Illinois to Wayne and Roberta Bridges on Sept. 11, 1977, the rapper and actor has won multiple awards including four Grammys. He was also recognized by the Screen Actors Guild for roles in the 2004 film “Crash” and 2005 film “Hustle and Flow” alongside Terrence Howard.

According to the Santa Monica Mirror, he is expanding his restaurant Chicken and Beer in the Los Angeles International Airport.

”I remember when he opened up his first restaurant called Straits on Juniper Street,” said DJ Incognito. To be able to open your own restaurant named after your first No. 1 album [Chicken N Beer] inside the world’s busiest airport [Atlanta Hartsfield-Jackson], let’s just take a pause and think about that. Genius.“

Ludacris has announced on his social media pages that he is working on a holiday-themed movie that is currently in production in Atlanta. He is also working on the 10th installment of the Fast and the Furious franchise. He has starred or played a supporting role in six of the films so far. The films have collectively grossed more than $1 billion.