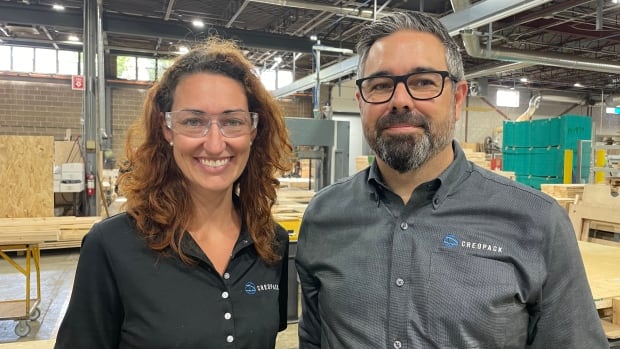 
At a packaging plant in a Montreal suburb, workers from 35 countries work the line, nailing and assembling crates for shipment.

The company, Creopack, has about 100 employees — 60 per cent of whom were born in countries other than Canada. The company is actively seeking more.

Efforts to hire locally have been unsuccessful.

“It can take six months to find one person,” said Creopack’s vice-president, Jean-Sébastien Comtois. The company paid tens of thousands of dollars and went through nearly three years of red tape to attract temporary foreign workers, only to hire just 12, six of whom have not yet arrived.

Comtois says the worker shortage is hampering his business development prospects, and he’s calling on Quebec’s political parties to do whatever is necessary to attract more people to the workforce.

His experience is anything but isolated, says Véronique Proulx, president and CEO of the Quebec Manufacturers and Exporters Association. Proulx estimates manufacturers in the province have lost $18 billion over the last two years due to the labour shortage.

“It’s really slowing down their capacity to grow. It’s affecting their competitiveness. A lot of manufacturers are refusing orders or letting go customers because they just can’t find the workers they need,” she said.

And with an aging population, a booming economy and a declining birth rate, the worker shortage is set to worsen, according to the Conseil du patronat, Quebec’s largest employers’ group.

The group’s president, Karl Blackburn, said that trend will leave 1.4 million jobs to fill between now and 2030.

Proulx and Blackburn are calling on Quebec’s political parties to increase the number of immigrants.

None of the parties are promising an increase in immigration as big as what Blackburn proposes, from a maximum of 50,000 under the CAQ to 80,000 annually.

The Quebec Liberal Party (PLQ) and Québec Solidaire come closest to the Conseil du patronat‘s target, with PLQ Leader Dominique Anglade promising to increase the number of immigrants to 70,000 per year.

Québec Solidaire says the province could welcome that many or more: between 60,000 and 80,000. The Parti Québécois calls for cutting back the number of immigrants.

The Coalition Avenir Québec — the party most likely to form the next government, led by incumbent premier François Legault — says Quebec cannot accommodate more immigrants than it is accepting now, that is, 50,000 per year. The Conservative Party of Quebec says it would also keep immigration levels about the same.

The issue is, how many immigrants can Quebec absorb without risking its French-language identity?

Blackburn dismisses concerns about the imperiled French language in Quebec as “not a real debate.”

“The best way to integrate [immigrants] is through the workplace,” said Blackburn. “And we have enough places to be able to successfully integrate immigration.”

Off the cuff — but telling?

The subject of immigration often rears its head during Quebec campaigns, and the debate can quickly turn ugly.

Last week, when asked about the federal government’s plan to bring 450,000 new immigrants to Canada annually, Legault said integrating immigrants is a “challenge,” in part because Quebecers have certain values, and “extremism” and “violence” can occur if it’s not done carefully.

Legault’s remarks drew ire from his opponents, who called them divisive and hurtful.

Hours after making his comments, Legault issued a statement saying he “didn’t want to associate immigration with violence,” and he was sorry if his words “created confusion.”

But La Presse columnist Yves Boisvert said the CAQ leader’s remarks, though off the cuff, are in keeping with how he’s spoken about immigration in the past.

“It’s in line with what François Legault has been saying, feeling or expressing in many ways, in legislation or political decisions,” Boisvert said on CBC’s Radio Noon last week.

The CAQ leader ran on a platform of cutting immigration levels by 20 per cent, back in 2018.

In his first term in office, Legault imposed a so-called “values test” on newcomers, and Bill 21, adopted in 2019, bans civil servants in positions of authority, including teachers, from wearing religious symbols on the job.

Boisvert said Legault talks about immigration as though it were a “necessary evil” because of Quebec’s aging population and the need to replenish the workforce.

“But he’d rather not have any immigration. That’s not what he’s saying, but that’s the spirit of the party.”

Quebec’s actual permanent immigration levels have been between 40,000 and 50,000 annually in recent years, but in fact, the province will take in nearly 70,000 immigrants this year in a bid to make up for the dire worker shortages that became so apparent at the height of the COVID-19 pandemic.

Economists and demographers cannot say exactly how many immigrants would solve Quebec’s labour shortage. However, a 2019 report by the Institut du Québec, a think tank associated with the Conference Board of Canada and the business school HEC Montréal, ran simulations to try to answer that question.

“Regardless of the scenario, it appears all simulations show that immigration alone will not be able to completely cancel out the impact of the aging populations,” the authors wrote.

“Although immigration has generally positive demographic and economic impacts on the Quebec economy, the models clearly show that there is not an optimal number of immigrants that Quebec should welcome each year, which would, like a magic solution, offset the effects of an aging population.”

That’s cold comfort to Comtois, the vice-president of Creopack, whose company has spent a million dollars to automate its packaging machinery, in part because he can’t find enough workers. For him, the political debate over capping immigration levels is beyond frustrating.

Members of his team have travelled as far away as Cameroon and the Philippines in the search for more workers. He’s gotten the necessary permits, helped newcomers find housing and tried to smooth their integration in countless other ways.

“We need immigrants in the labour force,” he concludes, “and it will be good for our country, for sure.”

All he needs is for whomever is elected on Oct. 3 to come to the same conclusion — and act.