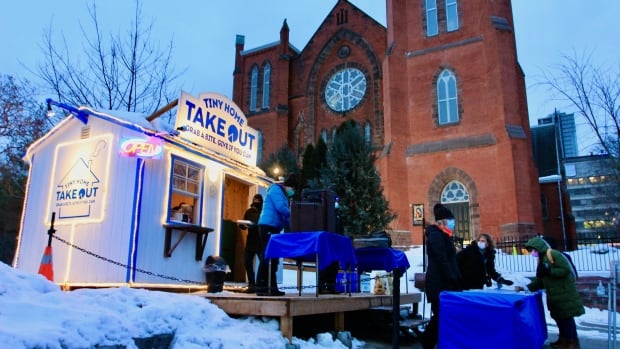 
Everything seems to be getting more expensive. Food, gas and housing prices are on the rise while paycheques are slow to keep pace. The CBC News series Priced Out explains why you’re paying more at the register and how Canadians are coping with the high cost of everything.

Rapidly rising food prices are putting a strain on household budgets, forcing more people to turn to their communities for their next meal, and grassroots groups are stepping up in new ways to help.

Food prices jumped six and half per cent in January 2022 — the biggest increase in more than a decade, according to Statistics Canada. Food Banks Canada says a combination of high housing costs, pandemic job losses and rising food costs has forced more people to use food banks.

The group’s latest national data shows a 20 per cent increase in visits to food books during the pandemic, with 1.3 million people visiting in March of 2021 alone. That’s the largest increase since 2008.

In downtown Kitchener, Ont., a church parking lot has been transformed into a takeout spot providing meals for people in need.

“I come here every day, like, I don’t have a lot of money,” said Paul Jones who lost his job and relies on the Tiny Home Takeout program. “It helps because I don’t get enough, you know, for the month, counting groceries.”

St. Mary’s Roman Catholic Church used to serve from its basement, but when the pandemic hit, it switched to takeout. Its team makes 300 meals five nights a week with the help of volunteers in a newly renovated kitchen, led by a professional chef. People can choose from a menu with items such as pizza, salad and soup.

Father Toby Collins, pastor at St. Mary’s Church, says after paying rent, many don’t have enough money left over for food, so they turn to the Tiny Home Takeout program that’s set up in the corner of the church parking lot. 1:03

“You get the dignity of, you know, to be treated like you’re in a restaurant,” said client Henry Haskins.

While some people pay what they can to help keep the program running, Father Toby Collins said he’s seeing more in need of a free meal.

“There’s this need for basic necessities that they used to be able to afford,” he said.

“It’s just as important to be innovative about our ideas as it is about accomplishing the task of feeding people who go without food.”

In Charlottetown, P.E.I.’s first community fridge is packed with free groceries and some prepared food. It sits inside a newly built shed in the parking lot of a bingo hall. For Kayla Baldwin, a college student on a tight budget, it’s a lifeline.

How a community fridge in P.E.I. is helping keep some people afloat:

15-year-old Samel Sunil, co-founder of P.E.I.’s first community fridge, says the community response has been wonderful and more people continue to volunteer to take care of the fridge. 1:14

“Lately food has been really expensive, especially if you’re eating healthy,” said Baldwin. “As a college student trying to pay [school] fees and stuff, it’s also hard, for food and rent and everything else.”

Fifteen-year-old Samel Sunil came up with the idea with his sister. He says with more people turning to the fridge for food, they’ve ensured it’s stocked and open 24 hours a day, seven days a week, so its users can help themselves whenever they need to.

“They can rely on the P.E.I. community fridge to take something, or the next day they can also contribute to it,” Sunil said.

But nowhere is the problem of rising food prices felt more than in Canada’s far north where grocery prices have always been high. Nunavut has the highest prevalence of food insecurity at 57 per cent, according to the latest data from PROOF, a research team investigating household food insecurity, which is defined as having inadequate access to affordable, nutritious food due to financial constraints.

Today, Northerners are faced with higher prices for just about everything — including the cost of hunting due to higher prices for gas, equipment and ammunition. To help, the Qajuqturvik Community Food Centre in Iqaluit, Nunavut, has launched a new program providing boxes of traditional country food such as seal, caribou, and whale. Anyone can buy a box for $120 — others just pay what they can.

Rachel Blais, executive director of Qajuqturvik Community Food Centre in Iqaluit, says traditional country food is important because it’s connected to culture, but with hunting becoming more expensive, the essential staples are out of reach for many. 1:11

“They’re some of the freshest, most sustainable and healthiest foods that people can have access to,” said Rachel Blais, executive director of the Qajuqturvik Community Food Centre.

“Especially for community members who are experiencing chronic food insecurity, having regular and consistent access to country food is essential to their health and well-being.”

Blais said when the program was announced, the centre ran out of inventory within 48 hours.

“That showed us that there was a really clear demand and need for affordable country food,” she said.

But experts on food insecurity say charity is not a long-term solution.

“These grassroots groups are very committed, they’re working very hard, they’re doing great work,” said Gisèle Yasmeen, a senior fellow with the School of Public Policy and Global Affairs at the University of British Columbia and affiliate with The Margaret A. Gilliam Institute for Global Food Security.

Food prices are expected to rise to a record high again this year. Until those kinds of fundamental reforms are put in place, it’s almost certain more people will be turning to their communities for help.

Do rising food prices have you experiencing sticker shock at the grocery store? Show us what you’ve been seeing at your local supermarket and send a photo or video with a brief description to ask@cbc.ca. Be sure to also include your name and location. It may be featured on CBC News Network.

McDonald’s to pull out of Russia for good

Canadian home prices fall 6% in April, down for 2nd month in a row