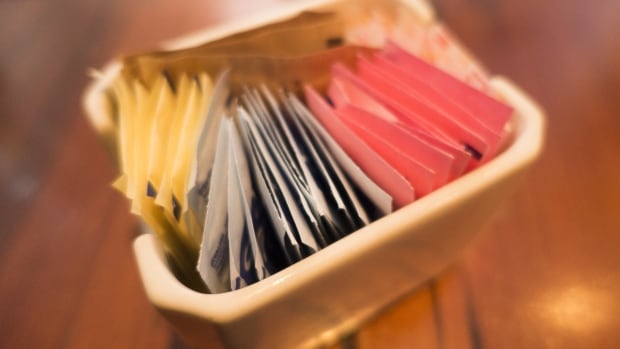 
The safety of artificial sweeteners has been debated for decades, but new research is renewing concerns about their potential health impacts.

Researchers behind a large-scale nutrition study out of France say they’ve found associations between consumption of artificial sweeteners, like aspartame and sucralose, and cardiovascular disease and cancer.

The NutriNet-Santé study, which included more than 100,000 participants, is among the largest of its kind, and the first to quantify the amount of sweeteners consumed, they say.

“It’s an important step — a new brick to the wall — regarding the weight of evidence that we would train together regarding artificial sweeteners and health,” said Mathilde Touvier, head of the Nutritional Epidemiology Research Team at the French National Institute for Health and Medical Research and one of the study’s authors.

Non-nutritive sweeteners, as they’re known in nutritional science, are intensely sweet — some hundreds of times sweeter than sugar — and favoured by many for offering the taste of sugar without the calories. And as the long-term effects of too much sugar become better known, artificial sweeteners are also seen as an alternative.

The Dose16:06Is it time to cut out artificial sweeteners?

While diet soda might be the most obvious source, artificial sweeteners are found in all kinds of common foods, including yogurts, baked goods and even ketchup.

Previous studies have found sugar substitutes can alter gut microbiomes and elevate blood sugar. Other studies have even suggested that they can lead to weight gain, though that has been disputed.

“There really is growing evidence to challenge the assumption that artificial sweeteners are metabolically inert substances. And I do think these findings should give us pause,” said Leslie Beck, a dietitian and health columnist, in an interview with The Dose’s Dr. Brian Goldman.

The most recent NutriNet-Santé study on cardiovascular health was published last month in the British Medical Journal.

Compared to non-consumers, higher consumers tended to be younger, have a higher body mass index, were more likely to smoke and less likely to exercise.

A separate study also using data from the NutriNet-Santé group, published last March in the journal PLOS Medicine, found an association between artificial sweeteners — aspartame and acesulfame potassium in particular — and cancer risk.

Touvier notes that the World Health Organization (WHO) is currently investigating the safety of artificial sweeteners.

In a meta-analysis of nearly 300 studies published in April, the WHO found there may be short-term benefits for weight loss when sugar-based drinks are replaced with artificially sweetened beverages — but not when compared to water. It also found that studies suggest “the possibility of long-term harm in the form of increased risk of obesity, Type 2 diabetes, cardiovascular diseases and mortality,” but cautioned that additional research is needed.

“We hope that this new work will bring important evidence and help [the WHO] to revise, potentially, their opinion and regulation on artificial sweeteners,” said Touvier.

In Canada, sugar substitutes are regulated and approved following a safety assessment by Health Canada.

David Ma, a professor and nutrition researcher at the University of Guelph, says while the most recent NutriNet-Santé study’s findings uncovered increased cardiovascular health risk in a relatively small number of people, they suggest there’s a “signal” for potential long-term health effects.

However, that doesn’t indicate immediate danger for most consumers.

“I would say that, you know, the sky is not going to fall down because we have artificial sweeteners in our diet,” said Ma, who is also the director of the Guelph Family Health Study.

“But certainly we need to have an eye out for everything in our diet, including artificial sweeteners in terms of the short-term and the longer-term effects.”

Like everything in nutrition, the researchers say moderation is key. And Touvier says based on her study’s findings, occasional consumption of artificial sweeteners is fairly low risk.

Canada’s food guide states that sugar substitutes are not needed for healthy eating. In fact, using them can lead to less healthy food choices and increase preference for sweet foods.

Whether it’s sweetness from artificial sweeteners or sugar, Beck said cutting back is key. She recommends:

“It is entirely possible to adjust your taste buds and come to prefer a less sweet taste,” said the dietitian.