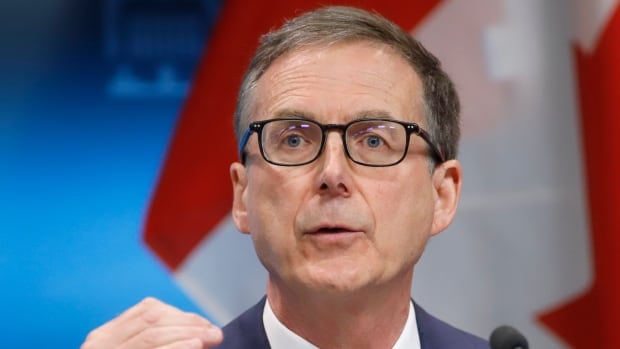 
As criticism piles on from politicians, pundits and interest groups, Bank of Canada governor Tiff Macklem says he’s felt no threat to the institution’s independence.

“I do not have any concerns about the bank’s independence being under threat,” Macklem said in an interview with The Canadian Press on Wednesday.

Over the last year, the central bank has been under intense scrutiny for both its policy response to the COVID-19 pandemic and the extraordinary steps it has taken this year to clamp down on decades-high inflation.

Since March, the Bank of Canada has raised its key interest rate six times consecutively, embarking on one of the fastest monetary policy tightening cycles in its history.

Bank of Canada hikes interest rate to 3.75 per cent

Canada’s central bank raised its benchmark interest rate to 3.75 per cent as part of its ongoing effort to bring down inflation. Bank of Canada governor Tiff Macklem pointed to signs of an economic slowdown that may tame inflation, but could also lead to recession.

The rate hikes have been in response to inflation reaching levels not seen in nearly four decades. Canada’s annual inflation rate was 6.9 per cent in September. It has been steadily declining since reaching its highest rate this year of 8.1 per cent in June.

The ongoing rate hike cycle has sparked loud criticism from progressive voices concerned about the effect it is having on employment, as forecasters are increasingly expecting higher interest rates to trigger a recession.

In a letter addressed to Prime Minister Justin Trudeau on Oct. 21, NDP Leader Jagmeet Singh said that while he supports the central bank’s independence, he warned that another rate hike will have a “serious impact on families.”

When asked by reporters Tuesday about the letter, Finance Minister Chrystia Freeland acknowledged the economic pain Canadians are facing but noted that institutional stability is important during challenging economic times, with the Bank of Canada’s independence playing an important role in ensuring stability.

Singh’s criticism didn’t stop the Bank of Canada from announcing a half-percentage point rate hike on Wednesday and signalling it wasn’t done raising rates just yet.

During a news conference on Wednesday, Macklem said the Bank of Canada is facing tough decisions, and when decisions are difficult, the central bank’s independence becomes more important.

He later echoed that message in his interview with The Canadian Press.

“Lots of people are giving us advice on what we should do,” Macklem said.

However, there’s a reason why central banks are independent institutions, he added.

Poilievre, Gould spar in House over rising use of food banks

Opposition Leader Pierre Poilievre went up against Minister of Families Karina Gould over a report from Food Banks Canada that says the number of Canadians using their services is up to 1.5 million this year.

“The reason is that there are tough decisions to take, and you do have to look longer term. And it’s at times like this, that when it’s difficult, that you see the value of the independence of central banks.”

Criticism of the Bank of Canada in Ottawa most notably began with official Opposition Leader Pierre Poilievre, who has heavily criticized the central bank’s government bond purchase program at the start of the pandemic.

He’s claimed the bank printed money to enable federal spending, thereby fueling inflation. While running to be leader of the Conservative Party of Canada, Poilievre vowed to fire Macklem if he became prime minister, though he has not explained how he plans to get rid of the governor given the Bank of Canada Act would not give him that power.

Macklem was appointed by the bank’s board of directors with the approval of the governor in council for a seven-year period. His term runs to June 2027.

In response to claims that the Bank of Canada printed money, the central bank took to social media this summer to try to set the record straight, though that has not stopped members of the Conservative party from attacking the central bank.

Many economists and market watchers have criticized the Bank of Canada for not raising interest rates earlier, and the central bank itself has indicated that stimulus measures went on for too long.

Last month, Bank of Canada deputy governor Paul Beaudry said in hindsight, governments and central banks should have withdrawn stimulus measures earlier as economies recovered from the COVID-19 pandemic, which likely would have kept a lid on inflation.

Now, the Bank of Canada has swung in the other direction this year, raising rates aggressively and triggering new criticism.

In its latest monetary policy report, the Bank of Canada revised its economic projections, now accounting for a significant economic slowdown.

It expects economic growth to stall by the end of this year and in the first two quarters of 2023, with growth somewhere between zero and 0.5 per cent, before gaining ground in the second half of next year.

The Bank of Canada has indicated repeatedly that it intends to fulfill its mandate and that restoring price stability is its primary focus.

Singh’s recent letter to the prime minister is part of growing calls for the central bank to stop raising interest rates, or to at least take a more cautious approach with its rate hikes.

Labour pushes back against Bank

Labour groups in particular have been vocal on the issue.

“The Bank of Canada is determined to push the economy into a recession, no matter the impact on individual Canadians who could lose their jobs, their homes and their quality of life,” Bea Bruske, president of the Canadian Labour Congress, said in a statement after Wednesday’s rate decision.

“Canada’s unions are calling on the Bank of Canada to pause interest rate hikes until the impact of previous policy interventions is clear.”

Macklem said the central bank is aiming to balance the risks as it raises interest rates, but said if it’s half-hearted in its decisions, Canadians would suffer from high inflation for longer.

“I am acutely aware that the Bank of Canada, particularly right now, is having a lot of effect on the lives of Canadians. And that’s a big responsibility,” Macklem said.

With Canadians feeling anxious, the governor said the central bank has a responsibility to be transparent with the public and instill confidence that inflation will come down.

“I’d love to get there faster, but it’s going to take some time.”