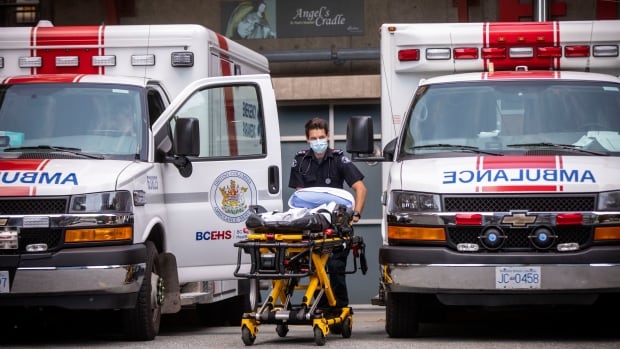 
Michael Dunbar has spent the past year working as a medic at an industrial site near Kamloops, B.C., standing by his decision that cost him his job at B.C. Ambulance Service.

He says he never disclosed his COVID-19 vaccination status to his employer, which led to his termination when immunization mandates went into effect for provincial health-care workers.

“It was pretty devastating to lose the opportunity,” he told CBC News, noting it was a personal choice not to get vaccinated.

“And here we are on the tail end [of the pandemic] and we’re still not able to work if we’re not vaccinated.”

Dunbar is one of many paramedics who lost their job as a result of vaccination status — and who are eager to get back to work for provincial health, watching as vaccination requirements ease in other provinces.

According to Ambulance Paramedics of B.C., 82 workers were terminated for not disclosing their COVID-19 vaccination status. It is a small fraction of about 4,500 workers who did receive the COVID-19 vaccine, according to union representatives.

But a group of those workers are calling on the province to allow them to return to work to help curb B.C.’s ambulance shortage as the number of patients waiting for extended periods of time for often life-saving service mounts across communities.

“I’m part of a group of 40-50 paramedics, we talk almost daily, and most if not all of them say we’d go back to work tomorrow if we could,” said Dunbar.

Vaccination requirements for health-care workers, which includes staff in hospitals and residential care centres, were renewed on Sept. 12.

More than 12.5 million doses of the COVID-19 vaccine have been administered in B.C., with health experts noting the risks associated with coronavirus infection far outweigh the risks of vaccination.

There have been more than 45,000 deaths associated with COVID-19 in Canada.

Union president Troy Clifford says while the union takes the same position as the bulk of its members, who are in support of the vaccine mandate, it has filed wrongful termination grievances against the province on behalf of those who have lost their jobs. A third party arbitrator is expected to review the case early next year, he said.

“It’s unfortunate that we’ve lost these 82 members because they were valuable employees that contributed to the service,” said Clifford. “But we do respect their choices.”

Still, Clifford says there are no signs that the province will reverse course anytime soon when it comes to the COVID-19 vaccine requirement for health workers.

Alberta, Saskatchewan and Manitoba are among provinces that have lifted vaccine requirements for such employees. Ontario and Quebec never followed through on sweeping provincial mandates.

In a statement, B.C.’s Ministry of Health cited uncertainty surrounding the pandemic in the months ahead as among chief reasons health measure will stay in place.

“Spread of disease is also expected to increase again this fall and winter. The potential for another variant of concern to emerge remains a real concern,” said a spokesperson.

Over the past year, many communities across the province have struggled with long waits for ambulances. In Barriere, a small town about 64 kilometres north of Kamloops in Central B.C., an investigation was launched after an infant died while waiting for an ambulance. It has yet to be confirmed whether ambulance response time was a contributing factor in the infant’s death.

Dunbar said the number of unvaccinated paramedics willing to go back to work could account for more than 20 additional ambulances in communities provincewide.

“Obviously it’s not going to solve the problem, that problem existed before COVID, but 24 ambulances on the street tomorrow or next week could make a big difference in the lives of British Columbians,” he said.

Clifford says any additional staffing would be welcomed, but notes that a lifting of the mandate could also come with increased risk of transmission for both patients and staff.

“Any time we’re losing staff for any reason, that has an impact on our service,” he said. “We’re also concerned if we’re not able to be safe for our patients and ourselves, what risk does that pose.”

Ambulance Paramedics of B.C. is currently in negotiations with the province for a new labour contract. Union reps are pushing for improved salaries and benefits that will put the profession on a level playing field with other jobs in the health-care sector.

This story is part of Situation Critical, a series from CBC British Columbia reporting on the barriers people in this province face in accessing timely and appropriate health care.