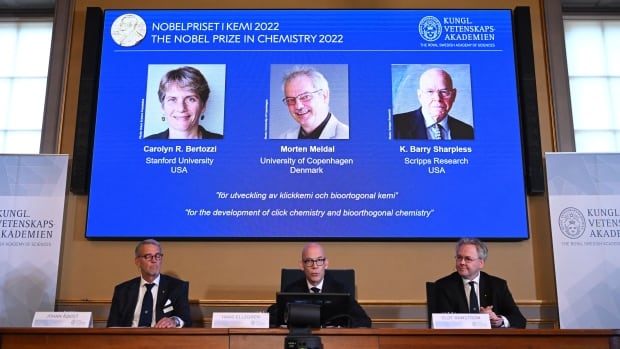 
Three scientists from the United States and Denmark were jointly awarded this year’s Nobel Prize in Chemistry for developing a way of “snapping molecules together” that can be used to design better medicines.

Carolyn R. Bertozzi, Morten Meldal and K. Barry Sharpless were cited for their work on click chemistry and bioorthogonal reactions, which are used to make cancer drugs, map DNA and create materials that are tailored to a specific purpose.

“It’s all about snapping molecules together,” said Johan Aqvist, a member of the Royal Swedish Academy of Sciences that announced the winners on Wednesday at the Karolinska Institute in Stockholm, Sweden.

Sharpless, who previously won a Nobel Prize in 2001 and is now the fifth person to receive the award twice, proposed the idea for connecting molecules using chemical “buckles” around the turn of the millennium, said Aqvist.

“The problem was to find good chemical buckles,” he said. “They have to react with each other easily and specifically.”

Meldal, based at the University of Copenhagen, Denmark, and Sharpless, who is affiliated with Scripps Research, California, independently found the first such candidates that would easily snap together with each other but not with other molecules, leading to applications in the manufacture of medicines and polymers.

Bertozzi, who is based at Stanford University in California, “took click chemistry to a new level,” the Nobel panel said.

BREAKING NEWS: <br>The Royal Swedish Academy of Sciences has decided to award the 2022 <a href=”https://twitter.com/hashtag/NobelPrize?src=hash&amp;ref_src=twsrc%5Etfw”>#NobelPrize</a> in Chemistry to Carolyn R. Bertozzi, Morten Meldal and K. Barry Sharpless “for the development of click chemistry and bioorthogonal chemistry.” <a href=”https://t.co/5tu6aOedy4″>pic.twitter.com/5tu6aOedy4</a>

She found a way to make click chemistry work inside living organisms without disrupting them, establishing a new method known as bioorthogonal reactions. Such reactions are now used to explore cells, track biological processes and design experimental cancer drugs that work in a more targeted fashion.

Bertozzi said she was “absolutely stunned” to receive the prize.

“I’m still not entirely positive that it’s real, but it’s getting realer by the minute,” she said.

The prizes carry a cash award of 10 million Swedish kronor (equivalent to just over $1.2 million Cdn) and will be handed out on Dec. 10. The money comes from a bequest left by the prize’s creator, Swedish inventor Alfred Nobel, who died in 1895.

A week of Nobel Prize announcements kicked off on Monday with the award in medicine honouring a scientist who unlocked the secrets of Neanderthal DNA. Three scientists jointly won the prize in physics on Tuesday for showing that tiny particles can retain a connection with each other even when separated.

The awards continue with the literature prize to be announced on Thursday at 7 a.m. ET. The 2022 Nobel Peace Prize will be announced on Friday at 5 a.m. ET, and the economics award on Oct. 10.

Cape May County sisters give birth to daughters on same day