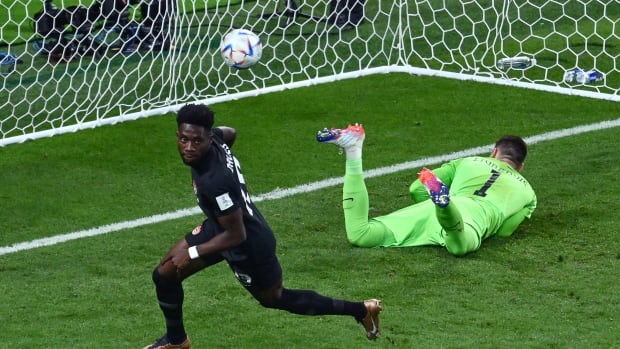 
Bayern Munich and Canadian men’s national team star Alphonso Davies has been named Canada Soccer player of the year for the fourth time in five seasons.

Davies was instrumental in helping the men’s team qualify for the World Cup for the first time in 36 years, and scored the squad’s first-ever goal at soccer’s showcase event in Qatar.

The 22-year-old left back from Edmonton also helped Bayern win the 2021-22 Bundesliga and 2022 DFL Supercup in Germany and became the all-time Canadian leader in UEFA Champions League appearances.

Davies was the lone Canadian attacker to play every minute at the World Cup and he scored the opening goal 67 seconds into Canada’s match against the eventual bronze medal winner Croatia.

Larin directed the ball to Tajon Buchanan on the right flank. Buchanan then sent a cross that found Davies flying through the air and the Bayern Munich star headed the ball past Croatian keeper Dominik Livakovic.

While Canada failed to get a win in Qatar, Davies will remember the mayhem that ensued after his landmark goal.

“When I headed it down and I ran to the corner flag, I looked to my left and I just saw all my teammates running towards me,” Davies said before Canada’s final World Cup game against Morocco. “Yeah, it was a great feeling. We’ve waited for this moment for a long time and it finally came and we were happy.”

Forward Alphonso Davies scored the first World Cup goal in the history of the Canadian men’s team in a 4-1 loss to Croatia on Tuesday.

Davies had three goals in seven international matches in 2022, tied for second on the team. He earned Canada Soccer player of the month honours in April, June and November.

At the club level, Davies made 27 appearances for Bayern helping his club win the 2021-22 Bundesliga title by eight points and lead the 2022-23 campaign by four points through the December break.

Davies has scored 13 goals in 33 career international matches and he is the men’s national team’s all-time leader with 16 assists.

Jessie Fleming was named the women’s winner for the second straight year on Wednesday.