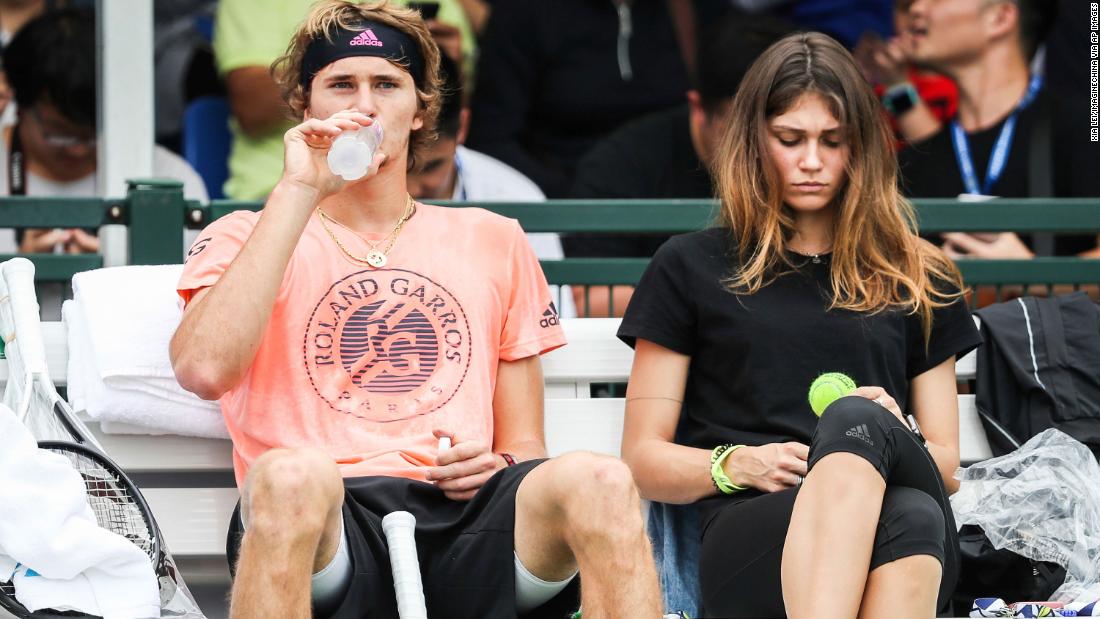 Olya Sharypova, 23, says Zverev tried to strangle her with a pillow in a hotel room in New York before she fled barefoot in fear of her life.

Screenshots of Whatsapp messages sent by Sharypova and shown to CNN Sport appear to suggest the alleged incident happened on August 23, 2019.

Sharypova described the incident without naming Zverev in an Instagram post Thursday but has confirmed she was referring to him in an interview with Russian outlet Championat.

The 23-year-old Zverev, who was runner-up in this year’s US Open, disputes her allegations.

“I very much regret that she makes such statements because the accusations are simply not true,” Zverev wrote in a statement posted across his social media platforms on Thursday.

“We had a relationship, but it ended a long time ago. Why Olga is making these accusations now, I just don’t know.

“I really hope that the two of us will find a way to deal with each other again in a reasonable and respectful way.”

Sharypova told CNN that she did not contact the police after the incident because she “loved this person and did not want to create problems for him.”

CNN could not independently verify her allegations. The New York Police Department confirmed to CNN there were “no complaint reports on file.”

Sharypova also questioned why Zverev did not reach out to her before posting his denial on Twitter.

“I do not want to say that he is a bad person. I’m just saying that he did a terrible thing to me,” she said in a statement to CNN.

“A huge number of girls suffer from cruelty, violence and abuse from men and do not tell their stories to anyone. Some are afraid, some just live with it, others simply cannot talk about this topic.

“It hurts me that in the 21st century we still have not come to the conclusion that a woman is also a person, a human. We must be respected, not treated like floor rags.”

CNN has twice reached out to Zverev’s representatives for comment but not received a response.

“I don’t know if you wrote it or whoever is handling your Instagram, but to this day you had no courage to explain yourself directly,” she wrote.

“Because I’m not lying and we both know it. I’m not afraid to tell the truth, are you? I want to show all men, that let themselves act badly towards women, that we are not an accessory, we are not +1, we are not dolls, you can’t do whatever you like.”

In later posts to her Instagram story, Sharypova thanked people for their support since the story emerged and posed a series of questions to Zverev.

“If all that I, as some say, is a lie, then why did I run out into the street without shoes?,” she wrote.

“If this is a lie, then why is there a photograph of my things being thrown out of the room? You were so brave, so have the courage to answer these questions.”

Sharypova provided CNN photos of clothes outside a hotel room, alleging her items had been removed by Zverev.

From two pictures posted during the first of two weeks of September 2019 on her Instagram feed, Sharypova would appear to have remained in New York after the alleged incident. One of the pictures — posted on September 12 — appears to be of Zverev.

Agency pictures also show the couple together at the China Open in late September 2019.

Zverev also announced he was expecting his first child — by another former girlfriend — in his social media posts on Thursday.