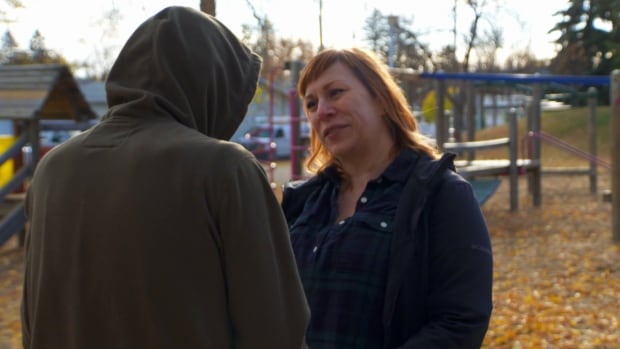 Ryley Bauman squeals as he scampers across playground equipment, crunching dead leaves with his fingers and scattering the tiny pieces into the wind.

A siren from a passing ambulance blares and he runs to his mother, burying his head in her shoulder as she wraps her arms around him tight.

The Edmonton teenager, who has autism, was arrested at a St. Albert playground earlier this month. More than three weeks later, the boy’s parents say he remains traumatized by his encounter with police.

Ryley, 16, was playing in a park behind his grandparents house in St. Albert on Oct. 2 when he was detained by RCMP who believed he was a man impaired by drugs.

An hour later, he was transferred from a police holding cell to hospital. Mounties said the boy repeatedly harmed himself while in their custody.

No charges were laid against Ryley and none are being considered, RCMP said.

Ryley’s mother, Laura Hawthorne, said her son — who is non-verbal and functions at the level of a seven-year-old — has been changed by the hours he spent in custody.

Ryley is now often anxious. The arrest has led to major setbacks in his development, she said.

“He just jumps out of skin,” she said. “He just runs up to me and his whole body shakes. He is really struggling.”

Scared to leave the house alone or be unsupervised at home, even for a few minutes, he refuses to return to his grandparents’ home in St. Albert.

“My whole life has been Ryley, just trying to help him through,” his mother said. “And this has just undone everything.”

The Alberta Serious Incident Response Team, the province’s policing watchdog, is investigating the conduct of the officers involved in the arrest. RCMP have also launched an internal investigation.

RCMP have said they were told by 911 callers that Ryley was a man impaired by drugs. However, details released last week by ASIRT reveal that police were informed before the arrest that Ryley might have a disability.

Ryley’s father, Aaron Krause, said his son now clings to his parents and has been robbed of his hard-won independence.

Simple tasks like preparing his own meals in the microwave are now a challenge, Krause said. He no longer wants to ride his scooter outside the family’s Edmonton home, once his favourite activity.

His medications have had to be increased and additional behavioural therapy will be needed to help him manage, Krause said.

“He was doing really well,” he said. “We’re starting back at zero again and it’s a lot because people don’t really understand how much it takes to get him to that point.”

St. Albert RCMP said they made the arrest after receiving multiple 911 calls about a man who was “exhibiting erratic behaviour” near a playground behind Albert Lacombe school.

RCMP said they were told Ryley, whom they described as co-operative, was an adult. Officers decided to arrest him when the teen couldn’t tell them his name, detachment commander Insp. Ryan Comaniuk told a news conference on Oct. 5.

The boy began hurting himself during the ride to the detachment but paramedics weren’t called until after he was placed in holding cells, RCMP said.

On Oct. 7, ASIRT was directed to investigate the arrest.

In an Oct. 19 news release, ASIRT said RCMP were told before they encountered Ryley that he could have a disability.

“RCMP received a report that a ‘younger male’ in his ‘early 20s’ was behaving oddly in the playground,” ASIRT said.

“The caller thought that the male could have ‘some severe handicap’ or possibly be on drugs, and should not be left in the playground alone. Police were dispatched for a suspicious male who was either on drugs or handicapped.”

Ryley and his siblings had been at their grandparents’ house for dinner when the teen asked to play on the swings in the park. The playground can be seen from the home’s kitchen window.

The family realized Ryley was missing minutes later, when his grandmother called him in for ice cream.

Within an hour, after searching the park and nearby ravine, they filed a missing person report. RCMP called back 20 minutes later to inform them that they had arrested Ryley.

It was the scariest moment of my life. They said he was apprehended. I still don’t understand why.– Laura Hawthorne

“The whole time we were just looking for him and we didn’t know,” she said.

“It was the scariest moment of my life. They said he was apprehended. I still don’t understand why.”

Ryley was released from hospital with soft-tissue injuries to his head, face, back and wrists. Ryley has never harmed himself before, she said.

The parents say their relief at finding Ryley soon turned to disbelief and anger.

Krause said he called RCMP for an explanation but is still waiting for answers.

Hawthorne and Krause hope their son’s arrest helps ensure there are robust training protocols for first responders, to ensure police and paramedics can recognize autism and other disabilities.

The couple said Ryley’s arrest also demonstrates the need for more community awareness and empathy for people whose brains work differently from what is considered typical.

“How was he hurting anyone?” Hawthorne said. “If anything positive can happen from this, I hope it’s a catalyst for change.”

If you know someone who is struggling with self-harm, help is available. For more information and resources visit http://www.sioutreach.org

Busted at 18, an Ontario man says he lost his career to Ottawa’s broken pot pardon process