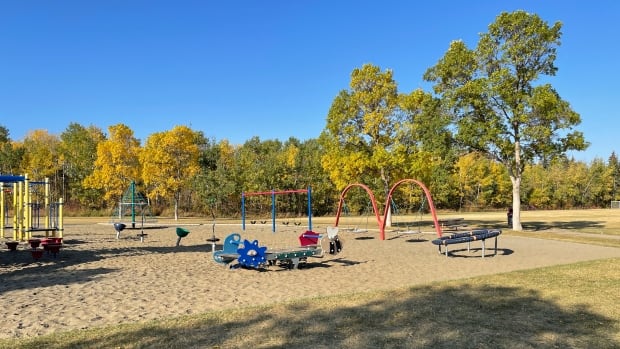 Alberta RCMP have launched an internal investigation after a 16-year-old non-verbal teen with autism  — arrested last weekend at a St. Albert playground — was taken to hospital after repeatedly harming himself while in police custody.

Laura Hawthorne, the boy’s mother, plans to pursue legal action following the arrest of her son Ryley on Sunday at a playground near his grandparents’ house.

Experts say the arrest demonstrates that RCMP officers need better training to recognize if a person has autism, and that stronger awareness is needed in the community.

In a news release, St. Albert RCMP said the teen was arrested as a suspect at a playground by Albert Lacombe school after police received 911 calls about a man “exhibiting erratic behaviour.”

Police said the teen was co-operative but couldn’t to tell officers his name. Due to concerns for his safety and that of the public, officers took him into custody, RCMP said.

Police believed the boy was an adult and that he was impaired by drugs, Insp. Ryan Comaniuk, detachment commander of the St. Albert RCMP, told a news conference Wednesday.

No charges were laid and none are being considered against the teen, Comaniuk said.

Alberta RCMP will examine the actions of officers involved in the arrest but the Alberta Serious Incident Response Team will not be involved, Comaniuk said.

RCMP said a call about a “suspicious adult male” came in around 4:30 p.m. Sunday. An officer was dispatched to the park but couldn’t find the person.

RCMP said they got a second call around 5:30 p.m. describing the same individual at the playground.

Minutes later, officers arrived and arrested a suspect who was “acting in an erratic manner,” RCMP said.

The boy began hurting himself during the ride to the detachment but paramedics weren’t called until after he was placed in holding cells.

“When St. Albert RCMP were transporting him to the detachment he was self-harming; however, did not suffer any injury that required emergency medical treatment,” RCMP said Thursday in a statement to CBC News.

“After being placed in detachment holding cells, he began to self-harm in a manner that was concerning and required immediate intervention to prevent him from further harming himself.”

Paramedics took the teen to hospital around 6:45 p.m., RCMP said.

Around 7:30 p.m., after the boy’s family filed a missing person report, investigators realized he was the person they had detained.

In a social media post Wednesday, Hawthorne said her son suffered soft-tissue injuries to his head and wrists.

Members are taught to immediately seek medical assistance when dealing with a person who appears to be in an acutely agitated or delirious state.-Alberta RCMP

RCMP did not answer questions about how their officers are specifically trained to recognize that a person has autism.

“Alberta RCMP are trained to de-escalate the situation, where the safety of police, the subject of complaint and bystanders are top priority,” RCMP said in a statement.

“Members are taught to immediately seek medical assistance when dealing with a person who appears to be in an acutely agitated or delirious state.”

“We would like to express our heartfelt thanks to everyone for their support and well wishes during this difficult time,” the family said in a statement provided by the law firm.

“The support that we have received to date has been overwhelming.”

The case highlights the need for police to be better trained and for people in the wider community to have more awareness about autism, Noyes said.

She said she understands that officers need to make quick decisions, and that parents at the park may have been alarmed, but said unfortunate assumptions were made.

“Perhaps, if people were concerned, heading to the hospital might have been a better choice to begin with,” Noyes said. “However, people make decisions based on the information that they have.”

Yona Lunsky, a clinician-scientist at the Centre for Addiction and Mental Health in Toronto, said the St. Albert case is heartbreaking.

Her research has shown that people on the spectrum are more likely to have adverse interactions with police.

Officers should be trained to be on the lookout for behaviours like repeating commands, avoiding eye contact or not responding to questions, Lunsky said.

She said it is concerning that police were called in the first place, and that the boy was quickly arrested.

“I’m not sure you know how dangerous the situation really was,” Lunsky said.

“The person who was apprehended by police was not committing any sort of crime.”

She said the case is a reminder of the need for improved awareness and empathy in the wider community.

Getting arrested would be especially traumatic for someone with autism, Lunsky said. The disorder often leaves people sensitive to light, sound and touch.

If you know someone who is struggling with self-harm, help is available. For more information and resources visit http://www.sioutreach.org

Anxiety disorders are common. Here’s what everyone should know about them