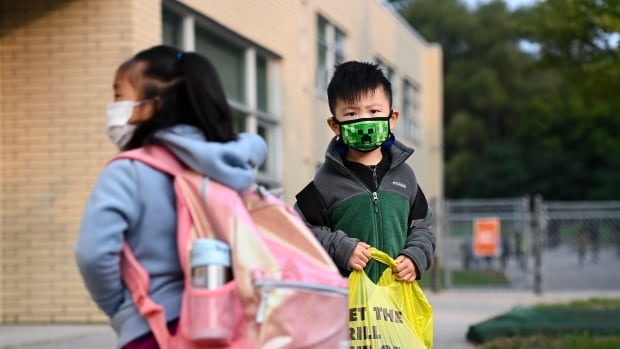 In a statement sent to news media Saturday, Smith alleged that the mental health, development and education of students, from kindergarten to Grade 12, have suffered because of wearing masks in class.

“We must turn the page on what has been an extremely difficult time for children, along with their parents and teachers,” Smith said.

On Thursday, Court of King’s Bench Justice Grant Dunlop ruled that the order to lift school mask mandates last February was “unreasonable,” because it was based on an interpretation of the province’s Public Health Act that gave politicians final say on public health orders.

On Saturday, the premier said she has directed Justice Minister Tyler Shandro to examine whether an appeal of the decision would be appropriate.

An appeal is unlikely, though, said Lorian Hardcastle, a University of Calgary assistant law professor with a joint appointment to the department of community health sciences.

Appealing the decision would put the government back in court and reopens the argument that lifting mask mandates infringes on charter rights of immunocompromised children, she explained. But there are also other mechanisms the government can use instead to achieve Smith’s goal, namely regulation.

The premier said Saturday that she has instructed Shandro, Health Minister Jason Copping and Education Minister Adriana LaGrange to alert her of any legislative or regulatory changes that would be required to “reaffirm or clarify our government’s full authority” on health and education matters.

If the Alberta government chooses to push forward, it will likely regulate the ability of schools to implement mask mandates through the Education Act, Hardcastle said.

“The judge was quite clear that the government’s previous practice of dictating to the chief medical officer of health what goes into her orders is not a legal one, so I think that they won’t go that route,” she said.

The government may also do nothing, opting instead to wait and see if schools bring mask mandates back on their own, she added.

Hardcastle said Smith’s statement is another example of politicizing COVID-19 and, in this case, stating something about the effect of masking on students that may not be based on fact.

“If she is going to make assertions that are unbalanced… she needs to present the evidence that she’s relying on, so that those who do have expertise in this area can critique it and weigh in,” she said.

“I just don’t think that evidence is there.”

COVID-19 is still present across Alberta.

The province’s seven-day PCR test positivity rate was 18.36 per cent as of Oct. 24, provincial date shows. There were 1,118 people in hospital with the illness, including 28 patients in intensive care units.

Data also suggests, however, that COVID-19 is spreading more in some regions than in others.

As of Oct. 24, the seven-day PCR test positivity rate in the Alberta Health Services south zone was over 28 per cent, but only about 15 per cent in the Edmonton zone.

Smith’s statement suggests she is taking a more “top-down, dictatorial approach” to public health, which would deny local entities to act according to their respective situation, Hardcastle said.

“Public health is massively broad and complex and multidimensional, and everyone needs to have their own appropriate rules and precautions in place,” Hardcastle said.

“In some cases, a local entity is in a better position to decide what’s appropriate than the provincial government passing a rule that applies to the whole province.”

Regardless, Alberta’s school boards must adhere to whatever the government decides, said Cathy Hogg, president of the Public School Boards Association of Alberta.

“We are governed by Alberta legislation and our minister of education, so we have to do as we’re told, whether we agree or don’t agree,” said Hogg, who is also the chair of Prairie Rose Public Schools, which serves 23 schools in southeastern Alberta.

“Our kids are a priority and that’ll always be our priority, so we’ll just do our best.”

In Prairie Rose schools, there are other measures in place to help prevent the potential spread of COVID-19, said division superintendent Reagen Weeks. She listed enhanced cleaning protocols and air filtration devices — installed in some classrooms — as examples.

Parents, however, can insist that their children wear masks in class, and school staff will do what they can to ensure a respectful environment, Hogg said.