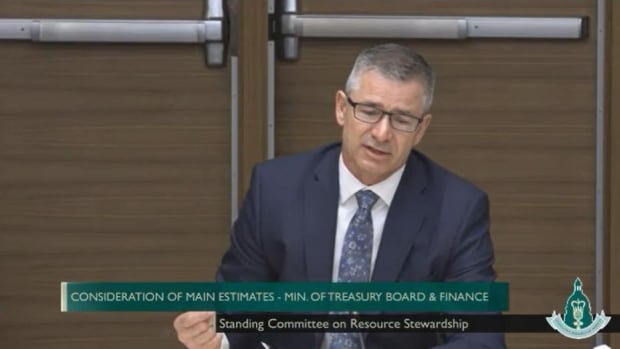 
Finance Minister Travis Toews says Albertans will get more clarity on Alberta’s investment in the cancelled Keystone XL pipeline when the province prepares its year-end financial report for the 2020-21 fiscal year.

Toews appeared before the Standing Committee on Resource Stewardship on Tuesday to answer questions about his ministry’s estimates in the 2021 budget.

Under questioning by NDP finance critic and Lethbridge-West MLA Shannon Phillips, Toews confirmed the province’s exposure in the Keystone XL deal is $1.3 billion at the most.

When Phillips pressed him on where the line item was in the budget documents, Toews said the investment would show up in the results of the Alberta Petroleum Marketing Commission in the 2020 annual report.

“We will have additional clarity at the time we’re preparing our year-end financial statements for the current fiscal year,” Toews told the committee.

“We are working in the best interest of Albertans to pursue every option in the public interest around KXL. That work continues … and Albertans can know and be assured that we will continue to be fully transparent with this investment going forward.”

Alberta’s investment in the Keystone XL pipeline has come under intense scrutiny since Democrat Joe Biden won the U.S. presidential election in November.

Biden delivered on his campaign promise to revoke the permit for the U.S. portion of the pipeline hours after taking office on Jan. 20.

Premier Jason Kenney and his United Conservative government have come under fire for investing in the pipeline last year, given Biden’s promise to cancel the permit.

Despite’s Toews’s assertions about transparency, the government has refused to release its agreement with project proponent TC Energy due to commercially sensitive information.

The 2021 budget, tabled on Feb. 25, provided some details about the province’s contribution to the project.

The total investment is $1.28 billion dollars with $384 million in equity and $892 million in loan guarantees.

Alberta is looking at ways to salvage some of its investment.

In November, Alberta’s auditor general said the government had to make $1.6 billion in adjustments to its year-end balance sheet. That included $100 million to account for investment in Keystone XL.

On Monday, Kenney referred to the government’s $10-billion capital investment in 2020 as “the largest infrastructure budget to build things in the history of Alberta.”

Phillips noted the infrastructure spend in 2020 was $8.2 billion and that the previous NDP government spent more than $9 billion in 2017-18.

Toews confirmed that adding Keystone XL to the 2020 capital expenditure brought it to close to $10 billion.

“We have to recognize that in the summer of 2020, there was a significant effort in the construction of KXL in the province of Alberta,” Toews said. “That put many, many Albertans to work in the southeast corner of the province and it was a very significant infrastructure investment in play that created well over a thousand jobs.”

Phillips asked Toews to let the committee know in writing how many Canadians worked on that portion of the project, which brought the pipeline over the border with Montana.