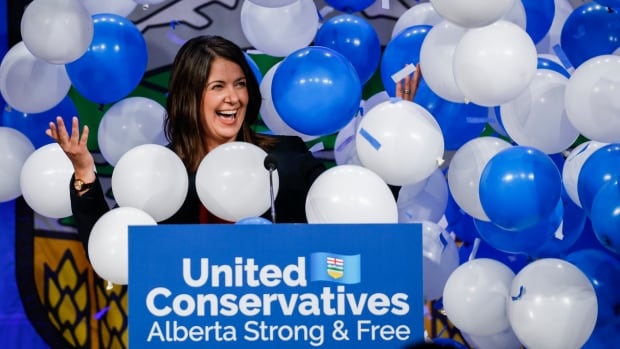 
Ten years after her failed bid to become premier as leader of the Wildrose, Danielle Smith was victorious in seizing the leadership of the governing UCP on Thursday night and will become Alberta’s next premier.

“I’m back,” she said on stage, after the narrow victory on the sixth and final ballot.

Many businesses and companies now must play the waiting game to understand what kind of leader she plans to be and what policies she intends to prioritize.

There is always an element of uncertainty whenever there is a change in political leadership. That’s the case with Smith, especially considering she’s been out of politics for several years and her controversial campaign centrepiece that would seek to allow Alberta to not enforce any federal law that isn’t in the province’s best interests.

In her victory speech, Smith took aim at the federal government, but said she doesn’t want Alberta to separate from the country.

“No longer will Alberta ask permission from Ottawa to be prosperous and free. We will not have our voices silenced or censored,” Smith said. “We will not have our resources landlocked or our energy phased out of existence by virtue-signaling prime ministers.”

“It is safe to say that many in the Notley-Singh-Trudeau alliance will claim that my plan to stand up to Ottawa with the Sovereignty Act is somehow meant to move Alberta toward leaving our beloved Canada,” she said.

Her proposed Sovereignty Act, drew criticism from some of her opponents, in part because of the uncertainty it could cause investors if the rule of law is not enforced.

“It will create chaos within this business environment. It will send tens of billions of dollars packing out of this province. It will undo all of the gains that we’ve made in the last three years,” said candidate Travis Toews while he was on the campaign trail.

Toews was Alberta’s finance minister before the campaign began and ended up in second place on Thursday night with 46.2 per cent of the vote on the final ballot.

Smith’s proposed act also drew fire from outgoing Premier Jason Kenney, who described it during the campaign as “risky, dangerous, half-baked” and “would do devastating damage to jobs, the economy and the prospect of pipelines.”

Smith maintained her proposed policy would actually encourage more investment to the province, not less.

The business sector won’t pre-judge her policies until the details are known, said Adam Legge, president of the Business Council of Alberta.

Economically, Alberta is leading the country in growth and oil prices are providing a colossal boost to provincial coffers (and leading to record levels of profit in the oilpatch too).

Still, some business leaders don’t want any unnecessary headwinds as the province faces the challenges of diversifying its economy, attracting skilled workers and navigating a global energy transition, among others.

During the campaign, Alberta Energy Minister Sonya Savage said the proposed act could be as harmful to Alberta’s future as Trudeau’s policies have been to the province’s past.

She noted that international investors concerned about their Alberta assets had been asking her about the Sovereignty Act.

The business community is ready to work with the new premier, said Deborah Yedlin, president of the Calgary Chamber of Commerce.

Still, the comments by Savage should give Albertans pause for thought, Yedlin said, especially considering how the sovereignty movement in Quebec (largely during the 1970s and 1990s) resulted in some companies cutting investment or leaving the province.

“Our energy sector was built with foreign capital [investment] and we’ll need that capital to support the decarbonization efforts that are ongoing,” she said.

“The prospect of political uncertainty caused a lot of companies to either decrease their presence in Quebec or leave, and it took a long time for Quebec to recover. That is not what we need in Alberta.”