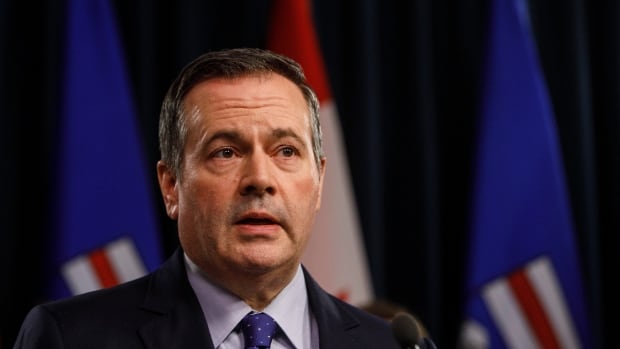 
Alberta is asking the federal government for $30 billion in funding to explore carbon capture, utilization and storage (CCUS) technologies.

News of the request was first reported by the Globe and Mail on Monday morning, who said it was outlined in a “discussion document” obtained by the publication ahead of the next federal budget.

The report was confirmed to CBC News by the premier’s office.

At a news conference on Monday, Premier Jason Kenney said a robust investment in CCUS technologies are necessary for Canada to reach the federal government’s target of net-zero.

“We have been world leaders in the (CCUS) technology … [and] we’re at risk of falling behind if we don’t up our game. That’s going to require major investments,” Kenney said.

“The government of Canada has, of course, committed to very ambitious emissions reduction targets, and it’s our view that there’s no feasible way for Canada to achieve those targets within the stated timelines without a widespread application of game-changing technology like CCUS.”

The Alberta government also announced Monday that it will collaborate with Ottawa to create a working group that aims to develop CCUS opportunities and technologies, and consist of officials from the governments of Alberta and Canada.

The group will be made of officials from both governments and will also be advised by representatives from key Alberta industries.

Kenney said the expansion of CCUS technology has been identified by the provincial government as a “potential game-changer for the reductions of emissions,” and particularly for Alberta’s energy sector.

He said conversations with the federal government about the importance of the large investment have been productive — particularly because the U.S. has shot past Canada in its application of CCUS technology, and in part because of a tax incentive program the U.S. created for the technology.

“I can tell you that we’ve … had a lot of good discussions with senior people in the federal government recognizing they need something like this to have any hope, realistically, of achieving their emissions targets,” he said.

Opposition leader Rachel Notley said  the NDP would be willing to look at emerging research and evidence on the subject of CCUS technologies.

However, she said the UCP has cancelled renewable energy programs that employed “thousands of Albertans” that would have reduced emissions throughout the province.

‘We’re pretty good at it’

Richard Masson, an executive fellow with the University of Calgary’s School of Public Policy, said he worked on a carbon capture development task force about 10 years ago — which signals Alberta’s long history of researching CCUS technology.

He said his research suggested that CCUS is viable, expensive and worthy of investment.

Since then, Alberta dedicated about $2 billion to developing four CCUS projects, two of which went ahead: the Shell Quest project, which captures CO2 from a Scotford Upgrader in Fort Saskatchewan, and the Alberta Carbon Trunk Line that captures CO2 at Nutrien’s Redwater Fertilizer Facility.

“Those two projects are both big, and they got lots of government support,” Masson said.

Between 2011 and 2013, Alberta also developed regulations about how CO2 could be put into the ground, because there needs to be assurances that it will stay there forever, said Masson, and liability structures if it doesn’t.

“Alberta has been doing this for a long time now, and we’re pretty good at it,” he said.

“So we have the geology, we have the technical understanding of it, and we have a regulatory system in place that allows us to be one of the better places in the world for carbon capture and storage to happen.”

Chris Bataille, a researcher with the Institute for Sustainable Development and International Relations, says carbon capture should be shouldered by companies, not taxpayers.

“It’s a very legitimate part of our decarbonization toolkit but we cannot use it as an excuse to keep on doing things the way we used to,” Bataille said.

“And it should not be used as a way to keep the oil from going past their natural lifetime.”

Australia’s female politicians ‘have had enough’