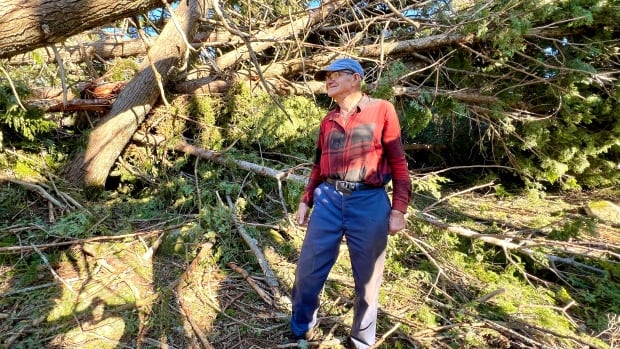 
Forester Elbert Murray has seen lots of terrible storms in his 78 years, but nothing like post-tropical storm Fiona that’s left his woodlots in Pictou County, N.S., nothing but a massive, tangled mess.

“It’s gone and I’ve lost a hundred years,” said Murray, who predicts the forest will recover over the next century. “Eventually it will come back to where it was.”

Meanwhile, Murray says he won’t be able to work his woodlot in Hodson this fall and winter because the damage is too extensive. So far he’s only been able to look at the perimeter of his woodlots, but expects the damage to be just as bad, if not worse, deeper in.

And the only way to go further into the woodlot is to cut his way through the damaged trees, but he doesn’t have workers to help him with a job that could take years to complete.

Murray says there are thousands and thousands of fallen trees that will be left to decay.

“It’s in bad shape, really bad,” he said. “The trees will rot in a year or two and then they’re gone.”

Making matters worse for Murray is the fact he lost two large barns on his property — as did many other farmers in Pictou County —  when high winds from Fiona blew in from nearby Northumberland Strait, levelling buildings.

One of the barns held all the heavy equipment he uses in the woodlot. Many of the barn’s timbers and crossbeams were milled from his own trees. Now they lay on the ground under twisted metal.

At Big Oak Farm in River John, the roof on the barn housing Enid Schaller’s cattle, sheep and hay blew off, leaving the animals trapped inside the lower level by fallen wood.

“We went running over and we were so glad to see them all alive,” said Schaller. “The only injury was one of our ewes had a limp.”

Schaller says the steel roof of the barn was spread over the farm property.

She’s going to leave 800 square bales of hay from this summer’s crop inside what’s left of the barn even though they are now exposed and wet. The bales will act as a buffer to keep rain and snow off the animals in the lower level until the barn can be replaced, she says. But that also means she’ll need to buy more hay for feed.

“We never thought in a million years we would lose that barn,” said Schaller. “It had stood for 200 years through every storm and every hurricane and never moved an inch, but this one brought it down.”

So when one of Schaller’s cows gave birth to a calf this week, they named it Fiona.

Dozens of farms in the area suffered extensive damages and many of them are still without power.

“What I have right now is a feeling of dread, of what’s going to happen this winter,” said Schaller. “I feel so much pain for the older farmers here who are looking at their wreckage and trying to figure out what they are going to do.”

How Dryden, Ont., is supporting people living with addictions and food insecurity