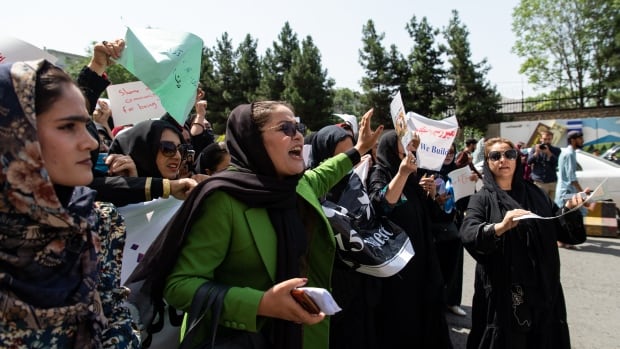 
Farid Ahmad still can’t believe it’s been a year since Kabul fell to the Taliban after American and allied troops, including Canadians, left the country.

“I [am] still thinking like it’s maybe a nightmare and maybe I will wake up and I will see things are totally different,” said Ahmad, who worked as a journalist based in Afghanistan’s capital before fleeing following the takeover.

Ahmad, who now lives in Winnipeg, said as a journalist, he remembers being faced with two choices when the Taliban took control of his home country.

“One is to escape, and the second is you have to hand over yourself to a terrorist group and work for them,” he told CBC’s Up to Speed host Stephanie Cram.

“But after two decades of working as a free journalist, it was very hard to work for a terrorist group and under their regime.”

Since he escaped Afghanistan, Ahmad said it’s been hard to watch the situation unfold in his home country — and to watch the response from the world.

LISTEN | One year after the fall of Kabul, an Afghan journalist reflects on the year of Taliban rule:

Up To Speed8:39One year after the fall of Kabul, an Afghan journalist reflects on the year of Taliban rule.

One year ago today, Kabul fell to the Taliban after American and allied troops left the country. Since then, many Afghans have left the country, including Farid Ahmad, who was a journalist based in Kabul. He reflects on what has been happening to his home over the last year.

“The economic situation of people is very bad, poverty is very high. There [are] no job opportunities,” he said.

“So the situation has worsened, [is] getting worse … day by day. But unfortunately, the world is also silent. And they are just watching us … watching [as] our people are suffering a lot of problems.”

Afghan-Canadian Zobair Deen said it’s also been difficult for him to watch the situation develop in Afghanistan over the past year.

Deen, who now lives in Winnipeg, worked as a political and security adviser for the North Atlantic Treaty Organization (NATO) from 2004 to 2014.

“A lot of us … worked very hard for democracy in Afghanistan and paved the way for the new generation of Afghans to get the right education and to lead their country,” he told CBC News at 6 host Janet Stewart.

“And to see Afghanistan fall back in the hands of terrorists, it’s a heart-wrenching situation.”

Deen said over the past year, he’s been in regular contact with people who directly or indirectly supported the Canadian government’s efforts in Afghanistan — people whose paperwork to allow them to come to Canada is still delayed.

“It is really a very disappointing and very discouraging situation to see them still stranded there in Afghanistan,” he said, adding that some ask him why Canada isn’t doing more to help them.

“When they ask me a question like that, I usually ask them to be patient because they’re caught in a bureaucratic procedure right now,” Deen said.

Canada initially said it would bring 40,000 Afghan refugees to the country, focusing on those who were employed by the Canadian government and military. The federal government says to date, it has welcomed 17,300, with more to arrive “in the coming weeks and months.”

The statement does not indicate when Ottawa expects to reach its target of resettling 40,000 Afghans.

In the statement, the ministers lamented what they referred to as the “steady deterioration” of human and democratic rights in Afghanistan since the Taliban seized power last year, pointing to the reintroduction of severe restrictions on the ability of women and girls to go to school and to move freely within the country.

Deen said while it’s difficult to comment on what may happen next in Afghanistan, he still has hope for his home country’s future.

“And that hope is primarily in women of Afghanistan,” he said.

Veterans from around the U.S. help to beautify Chicago neighborhoods