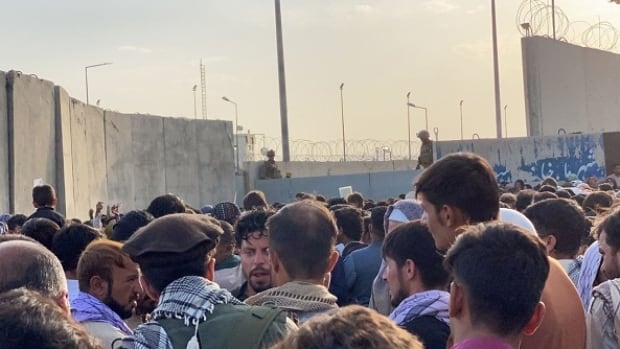 A year after the fall of Kabul, Canadian veterans urge Ottawa not to abandon Afghans trying to flee


It’s been one year since Kabul fell to the Taliban after American and allied troops — including Canadians — left the country.

Video footage showed Afghans streaming onto the tarmac at the Kabul airport, desperate to escape, as a U.S. air force plane took off. Some fell to their death trying to hold on.

“We watched that terrible situation unfold … we saw that tremendous catastrophe that happened in Kabul,” said Brian Macdonald.

A Canadian veteran who served in Afghanistan, Macdonald leads the non-profit Aman Lara, which is Pashto for “Sheltered Path.” The collective of Canadian veterans and former interpreters has been working over the last year to bring refugees to safety in Canada.

“When we were unable to get them out a year ago, it was devastating. But since then we’ve come together, we’ve doubled down and been able to get 3,000 people out,” he said.

But it’s been a slow and dangerous process when those refugees need to go through the Taliban to get a passport.

“These people that have helped Canada now have to stand up and go to an office that’s controlled by the Taliban and give their name and address and the dates of birth of their children,” Macdonald said.

“It’s a very dangerous thing to do.”

There was hope this June, when Pakistan agreed to temporarily allow Afghan refugees approved to come to Canada across its border, without a passport or visa.

“We were hoping it would be thousands, and it ended up being dozens,” he said.

“We’re dealing with the Afghan-Pakistani border, and it’s a very wild place. And so messages aren’t always clearly communicated, but we believe the window may still be open.”

A spokesperson for Immigration Minister Sean Fraser said Canada has added more employees on the ground to process applications as quickly as possible, including in Pakistan.

The department did not say how many undocumented Afghans have successfully made it to Canada through the arrangement with Pakistan.

Canada initially committed to bring 40,000 Afghan refugees to Canada — focusing on Afghans who were employed by the Canadian government and military. To date, the federal government says it has welcomed 17,300.

Canada’s plan for Afghan refugees is one of the largest programs in the world, Fraser’s spokesperson wrote.

But the federal government has been criticized for not doing more to help Afghans who assisted Canada in the NATO-led effort and are now at risk of being killed by the Taliban for their ties to Western nations.

Deputy Prime Minister, Chrystia Freeland, said “we need to not think in the past tense” when asked if Canada could have done more a year ago.

“We can hold our heads up high when we think about our response compared to that of our allies. There is a lot more work to do,” Freeland said in Toronto on Thursday.

“We need to keep on working to bring more people from Afghanistan to Canada, and that’s exactly what we’re doing.”

Deputy Prime Minister Chrystia Freeland says Canada’s priority is to focus on the women and children of Afghanistan ‘who have suffered real setbacks.’

Last month, Canada stopped accepting new applications to its special immigration program, a move that advocates say amounts to the abandoning of Afghans desperate to come to this country.

Macdonald hopes the federal government reconsiders its approach and commits to welcoming every Afghan who helped the government into Canada.

“A year ago, we were panicking to get as many people out as possible,” Macdonald said.

“We all thought — as veterans and other interpreters — that that window had closed, that the people we didn’t get out were stuck in Afghanistan.

“But what we’ve learned over the last year is we can still move them out. It’s at a snail’s pace. It’s not as many people as we’d like. But we are still grinding away every day, moving people out of Afghanistan.  And we’re just going to keep doing that until we get as many people out as we possibly can.”