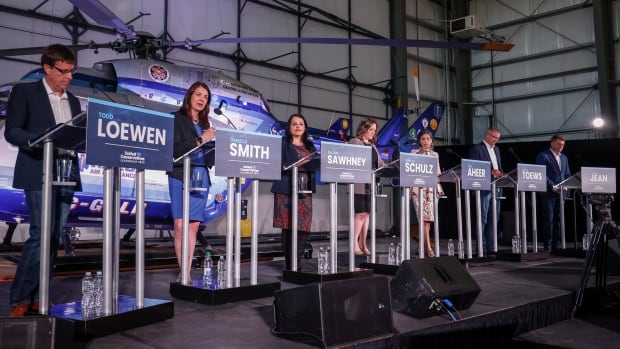 Nearly four months after the leadership contest began, one of seven contenders will emerge the victor.

Close to 124,000 people bought or renewed UCP memberships by the Aug. 12 deadline to qualify to cast a vote. Party members have been voting by mail since early September.

As of Monday night, about 82,000 members — 66 per cent of the total membership — had cast ballots, according to UCP sources familiar with the leadership race.

Members can vote in person this morning at five polling stations across the province.

The party says it will announce the results of the first ballot around 6 p.m. at the BMO Centre in Calgary.

You can watch the live results and victory speech here from 6 p.m. MT and follow our live coverage on CBC Alberta television newscasts from 6 p.m. MT. Vassy Kapelos is hosting a special edition of Power & Politics on CBC News Network from the BMO Centre in Calgary starting at 3 p.m. MT.

The ballots ask members to rank their preferred leaders in order of preference, numbered 1 through 7.

If one candidate secures more than 50 per cent of the votes on the first ballot, they will win the leadership.

If no one gets more than half the votes on the first ballot, the candidate with the lowest number of votes will be dropped from the ballot, and their votes will be reassigned to voters’ second choices.

The party will repeat that process until one candidate has a majority of support.

The UCP called the leadership race in May following a spring leadership review that saw Premier Jason Kenney receive support from 51.4 per cent of members. Kenney said it was not enough support for him to carry on as leader, and pledged to resign once members chose a new one.

Internal polling leaked from some camps suggests anti-establishment candidate Smith is the front-runner, with Kenney-aligned Toews in second place.

Lisa Young, a political science professor at the University of Calgary, said it’s difficult to poll with accuracy during leadership races, as only party members can vote. Most polls queried UCP supporters, not members specifically.

What leads Young to believe Smith is a favourite to win is that all the candidates are acting as if she’s the one to catch.

Independent Calgary-based pollster Janet Brown said the UCP leadership races rules are different, and more likely to lead to a grassroots-backed leader than a moderate consensus victor. The cutoff date to buy a membership in time to vote was much earlier, for one.

The UCP was born in 2017 with the merger of the Progressive Conservative and Wildrose parties into a new, big-tent coalition.

A new leader will be tasked with a challenge that some believe led to Kenney’s undoing — keeping the party united. Young said a Toews win presents a more immediate threat to that unity than a Smith win.

She said libertarian UCP members who bristled at pandemic public health restrictions — and think the Kenney government failed to effectively push back against federal government policies — may feel disenfranchised with a Toews win and believe their concerns about top-down leadership will remain unaddressed.

It may prompt some MLAs who tried to push Kenney out to leave caucus, Young said.

Smith has campaigned on introducing a controversial sovereignty act that she says would allow Alberta to refuse to enforce federal laws and court decisions it can’t stomach. If she can table moderated legislation MLAs can agree to, she might be able to hold the tent together, Young said.

Some UCP MLAs have said they could not vote in favour of an Alberta Sovereignty Act as described, which could create a crisis of confidence, but Smith has yet to release the act’s proposed wording.

Brown said her polling found the issues Albertans care most about now are inflation, health care and education, and yet, these were not the focus of the leadership campaign.

She said that has led to a disconnect between voters and the UCP, which could leave Rachel Notley and the NDP the winners of the next provincial election.

“Right now the idea of credible, steady leadership is looking more favourable to Albertans than the circus that is the UCP,” Brown said.