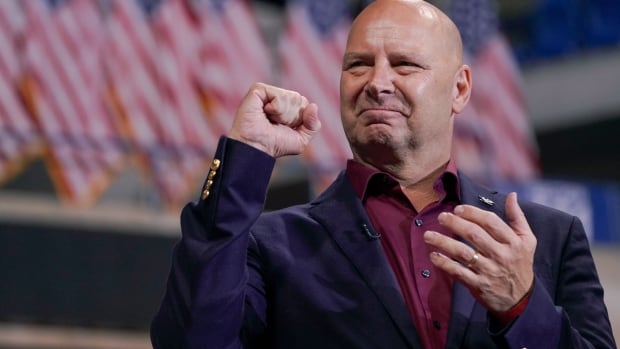 
One of the most controversial politicians in the United States is causing a stir far north of the campaign trail: at a Canadian university that once granted him a doctorate.

Students at the University of New Brunswick are pushing their university for details about its role in granting Doug Mastriano the crowning academic achievement on his CV in 2013.

A UNB associate professor listed on Doug Mastriano’s doctoral dissertation describes it as atrocious academic work and says he can’t understand why the paper includes his name.

“This dissertation has bothered me for nine years,” Jeffrey Brown told CBC News in an interview.

“[Mastriano] was awarded a PhD on very shaky grounds.”

The famous alumnus is now running for governor of Pennsylvania in next month’s midterm elections on a hard-right platform with potentially major implications, far beyond his state.

Election denialism is what made Mastriano nationally famous.

The state lawmaker tried overturning the 2020 election on behalf of Donald Trump; he was at the Capitol as the riot began there on Jan. 6, 2021 and even helped transport protesters to Washington.

Now he’s the Republican nominee for governor of Pennsylvania. The polls show him trailing. But if he happens to win, he would gain new power over national elections.

The Pennsylvania governor will appoint the chief election administrator and also judges who would hear election cases in the critical swing state.

Up in New Brunswick, Brown’s objections to Mastriano go way back, long predating his political career.

That old dispute within the university has now resurfaced publicly as Mastriano runs for an important office.

Mastriano’s campaign used his doctorate in fending off a recent political controversy. When a photo surfaced showing Mastriano wearing a Confederate uniform at a 2014 educational event, an adviser dismissed it as a smear job against a historian, pointing to his academic credentials.

Brown was on the examining board for Mastriano’s dissertation.

Mastriano’s work was dishonest, sloppy, tinged with religious zealotry, and indifferent to facts that contradicted his claims, said Brown, a scholar of U.S. history at UNB and a U.S.-Canada dual citizen.

He expressed alarm when the university granted the PhD and has provided CBC News with emails he sent colleagues at the time.

Brown lamented that the same traits he denounced back then are materializing in Mastriano’s public life: namely the fanaticism and indifference to facts.

“The prospect of Doug Mastriano having any power, anywhere, is horrifying,” said Brown, who met and worked with Mastriano on several revisions to his dissertation.

Eventually, Brown bowed out of the project. Or so he thought.

Mastriano’s dissertation involved a legendary American soldier, one of the most highly decorated of the last century.

Alvin York was a deeply religious Army sergeant who described being touched by God before a First World War battle where he killed 25 Germans.

His life story inspired a Gary Cooper movie. Mastriano has a long-running project to spread his story to younger generations, with a website, a doctoral dissertation and then a book.

Yet Mastriano’s project was dogged by scrutiny from the start.

Even before he arrived in New Brunswick, Mastriano, then an Army intelligence officer, made news in 2008 for his work to pinpoint the location of York’s heroics on a French battlefield.

Other scholars and a French bureaucrat accused him of sloppy research methods, misidentifying the battle location, ignoring contradictory details, digging without a permit and ruining an archeological site.

Mastriano dismissed his detractors as jealous and maintained his certainty he’d found the true battle site.

The archeological controversy was the initial reason Brown, the New Brunswick professor, voiced concern with the project.

Nobody examining Mastriano’s work had any archeological expertise, so, he asked, how were they supposed to scrutinize a paper filled with archeological claims, claims being vigorously disputed?

One was the quality of the writing: Brown said it took multiple revisions to correct basic grammar, style and punctuation problems on almost every page.

A cursory read of the finished paper still turns up basic errors: a colonel’s name repeatedly misspelled, an Italian military award misspelled in the introduction, and the wrong release year (1940) for the 1941 Gary Cooper movie.

There were more substantive complaints.

He said Mastriano offered opinions without facts or attribution to support them, an approach Brown called non-academic.

In a dramatic example of that, Brown said, Mastriano would make matter-of-fact claims even when referring to heavenly phenomena.

In one example, on Page 260, Mastriano writes: “The idea that York survived the carnage because of Divine Intervention also speaks of a miracle.”

“It wasn’t so much, ‘Sergeant York reported that,’ or, ‘York believed that,’ as it was, ‘God talked to York,'” Brown said in an interview.

“That’s where Mastriano wanted to go with it: that this guy was literally directed by God to begin fighting people. That would be righteous. That’s what God wanted.”

Faith is central to Mastriano’s life, and to his gubernatorial campaign.

He’s said journalists who appear to mock his faith will be barred from covering his campaign events and has bristled at being described as a “Christian nationalist.”

In the past, he’s explained how the Alvin York story fits into his faith.

In a 2019 speech, he espoused York as an alternative to the pacifist, turn-the-other-cheek philosophy within Christianity, as evidence the faithful can be warriors.

Prayer is a regular part of his campaign events. It was a recurring theme in speeches at a rally last month at the Pennsylvania legislature.

“Lord, you told us to pray for our enemies,” one speaker said, in a prayer to open the rally.

“We pray that they would lose.”

In Oklahoma, a teacher and history PhD candidate wrote last year to the UNB warning that Mastriano’s work was rife with academic fraud.

James Gregory, who first encountered Mastriano’s work in his published book, says he’s since found over 150 problems with the thesis.

It’s rampant with fake footnotes, he says, meaning the paper often makes a claim, cites a footnote to back it up, then, when you actually go check the source mentioned in the footnote, it says something else.

He showed CBC News some examples.

For instance, Mastriano’s paper says a journalist first took an interest in York’s story because of its religious aspect; a footnote then cites a telegram the journalist, Canadian George Pattullo, sent on Jan. 30, 1919. But Gregory tracked down the telegram and there’s nothing about religion, just Pattullo’s travel plans and a request for battlefield data.

“His dissertation is just filled with these issues,” Gregory said. “He’s making it up.”

Gregory insists he has no political axe to grind. He says he’s a registered Republican, in Oklahoma, and doesn’t care who the governor of Pennsylvania is.

His gripe, he says, is strictly academic. And somewhat personal. That’s because Gregory has also written about York; he cited Mastriano in his work and now he’s feeling deceived.

“He was wrong. Therefore my article was wrong. And everyone in the future who cites Mastriano’s work, now, their work is tainted.

“It’s not just that he’s changing history by lying and making things up. He’s also ruining everyone else’s work that trusts him.”

Gregory said he actually had a cordial relationship with Mastriano, exchanging messages online about their shared scholarly interest in York.

Then, suddenly, Gregory says, when he started spotting details that contradicted Mastriano’s work, the politician cut off contact and blocked him on Facebook.

Some students in New Brunswick started worrying about reputational taint after the Associated Press first reported on the controversy at their school.

A headline in a Fredericton newspaper cuts to the heart of their concern, asking: “Will employers question the value of UNB PhDs?”

A dozen Master’s and PhD students gathered last month to discuss plans to press the university for details about Mastriano’s degree.

The students plan to release a letter soon.

“A lot of us vented our frustrations at this.… This reflects on our academic training,” said Richard Yeomans, a PhD candidate in the history department.

“This man’s credentials are unearned.… It’s very clear a vanity degree was granted to him.”

Mastriano’s thesis supervisor, Marc Milner, a history professor and honourary colonel in the Air Force, did not respond to emails seeking comment.

Multiple efforts to reach current and retired staff at the university, including the communications office, received no response.

Mastriano, meanwhile, did not respond to requests for comment via phone calls to his three state legislative offices and emails to his legislative and campaign staff.

The professor, Brown, has a theory about what happened.

The school, he says, has a good relationship with the military, and let Mastriano through to avoid disrupting that.

He sent CBC News printouts of email exchanges from 2012 and 2013 laying out his myriad concerns, including one final note.

In that note, Brown told Milner that, from what he understood, regardless of his complaints, Mastriano would get his degree anyway.

Brown wrote: “I know that I will regret it if I allow my signature to stand on this dissertation.”

He says Milner responded that his services were no longer needed because the three-member examining committee already had enough people.

Brown backed away, after having spent months on the project.

But he just got a surprise.

The university finally released Mastriano’s thesis over the summer, amid external pressure after a years-long delay in making it public.

Brown’s name is still there, listed on the examining board.