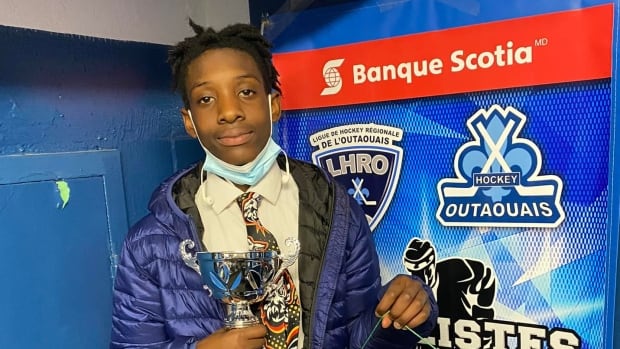 
In the wake of recent allegations of racism in Outaouais-area minor hockey, a Gatineau, Que., team has suspended six of its players while the provincial governing body cancelled weekend games.

L’Intrépide de Gatineau issued a news release Friday in response to the allegations by apologizing to two U15 AAA players and their families “following deplorable incidents that occurred on and off the ice.”

The team also announced, after conducting its own investigation, six players would be suspended over the allegations.

Anthony Allain Samake and one of his teammates from the L’Intrépide de Gatineau M15 AAA team had previously denounced incidents of racial abuse.

Along with the six player suspensions, the team says all players on the team will also take an education and awareness class on discrimination.

“We regret the impact they have had on the two young players targeted by the racist gestures and comments,” said Intrépide president Michel Andre in a statement, noting the people involved are all minors.

“We must provide our young athletes with organized sport activities that take place in a healthy, safe environment free from discrimination. We are determined to eliminate discriminatory behaviour or remarks against players, coaches or officials or any other persons.”

Also on Friday, the board of Hockey Quebec issued its own news release seeking suspensions for all parties involved in racial abuse.

In a statement, the board asked for L’Intrépide de Gatineau “to suspend anyone involved in the allegations until the complaints officer’s investigations are concluded.”

The governing body is also cancelling the final two games of the team’s season, scheduled for this weekend, in a move co-ordinated with the Ligue de Hockey d’Excellence du Québec.

Hockey Quebec also wants “those involved in the events that concern other U15 BB teams” be suspended until the conclusion of investigations.

Two players in that league — David Godwin from the Voiliers d’Aylmer and Blesson Ethan Citegetse from Loups des Collines — were among hockey players from the region who recently spoke out about being the victim of racial abuse this season.

“Hockey Quebec reiterates the importance of fighting against any act of racism, intimidation or harassment within our teams. No gesture should be tolerated and all the actors involved have a responsibility,” the organization wrote Friday.

Hockey Quebec president Yve Sigouin reiterated “any racist behaviour is unacceptable in hockey and in our society. It is very important to act immediately.”

“It is essential to protect the alleged victims by taking immediate action,” Sigouin said in a French statement.