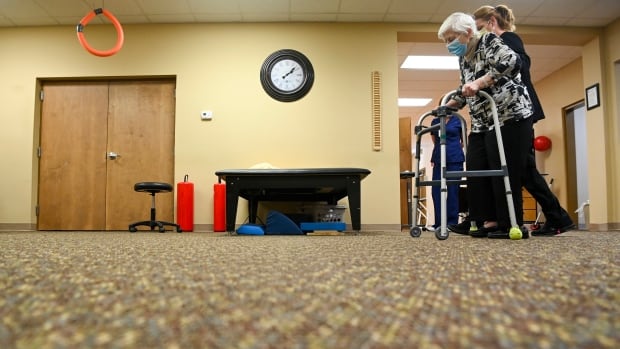 
Ontario hospital patients awaiting spots in long-term care can be moved to nursing homes not of their choosing up to 150 kilometres away, with charges of $400 per day if they refuse, the province announced Wednesday.

“Regulations and guidance will be given to our health care partners that keep them close to home and respect religious, ethnic and language preferences,” Jones and Calandra said. “Couples will be kept together.”

The regulations announced Wednesday are part of an effort to free up hospital beds as the health-care system grapples with temporary emergency room closures and a surgical backlog.

“We want to be clear about what this policy does: it frees up hospital beds so that people waiting for surgeries can get them sooner; it eases pressures on crowded emergency departments by admitting patients sooner,” Jones and Calandra said.

The ministers said the policy will only affect patients who are awaiting discharge from hospital and whose preferred long-term care homes do not have available spots.

The changes will begin Wednesday of next week.

Starting Nov. 20, hospitals will charge a standardized daily fee of $400 to patients who no longer require hospital care, but who choose to remain in hospital after being discharged, including alternate-level-of-care patients who have been authorized for admission to a long-term care home.

The province introduced legislation last month that would allow hospitals to send so-called alternate level of care patients to a long-term care home not of their choosing on a temporary basis.

The province has said there are about 1,800 of those patients currently in hospital awaiting a spot in one of their five preferred choices in a long-term care home.

The bill, which was pushed through the legislature without public hearings, has sparked outrage from seniors and advocates.

Jones and Calandra said the distances patients can be moved is “based on input we received from the sector and provide hospitals with the options needed for this policy to be effective.”

Hospital emergency departments across the province have been closed for hours or days at a time in recent months, largely due to a nursing shortage.

Placement co-ordinators would select long-term care homes within a radius of 70 kilometres from the patient’s preferred location, except in the north, where the radius would be 150 kilometres.

Mike Schreiner, Ontario Green Party leader, said in a statement on Wednesday that older people should not be punished for the province’s failure to invest in the health-care system.

“It is wrong to force elders to pay $12,000 per month if they refuse to go to an LTC home not of their choosing and far from family,” Schreiner said.

“It is shameful to gaslight seniors and lead them to believe that the crisis in our hospitals is their fault. And moving them away from their loved ones and caregivers is actually going to worsen the staffing crisis by putting extra pressure on our already overworked PSWs and LTC staff.  Without question, this is going to put elders at risk.”

Schreiner said the provincial government should do the following to treat people in long term care with dignity:

The end of the pandemic is in sight, WHO director-general says, ‘so let’s seize this opportunity’