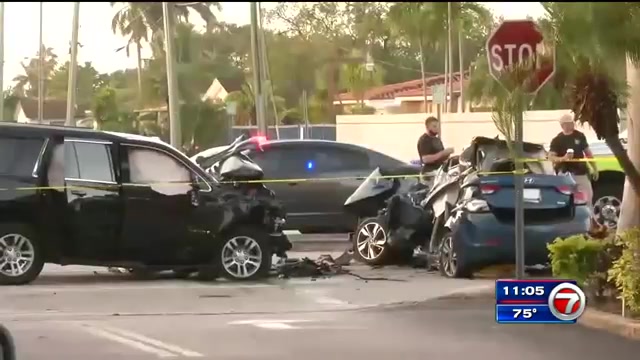 According to FHP, the vehicle carrying the four adults attempted to make a left on Flagler Street when it was hit by the vehicle with the three teens inside.

“As the Hyundai entered the intersection, the front of the Tahoe collided into the left side of the Hyundai,” Sanchez said.

The four adults were pronounced dead at the scene.

Three 16-year-olds were transported to Kendall Regional Medical Center with injuries that were deemed not life-threatening.

“A Miami-Dade firefighter confirmed that all four occupants of the Hyundai died at the scene — one adult female and three adult males,” Sanchez said.

Family members of the deceased victims have since placed candles at the scene of the crash.

A large crowd gathered Friday night to remember those who died in the crash.

Police are investigating if drugs, alcohol or speed played a factor as to the cause.

Investigators have not released the names of the victims.

Copyright 2020 Sunbeam Television Corp. All rights reserved. This material may not be published, broadcast, rewritten or redistributed.

Baby gets Coco Pops and nuts served in Brisbane isolation

Family searches for Cleveland mother kidnapped at gunpoint outside home