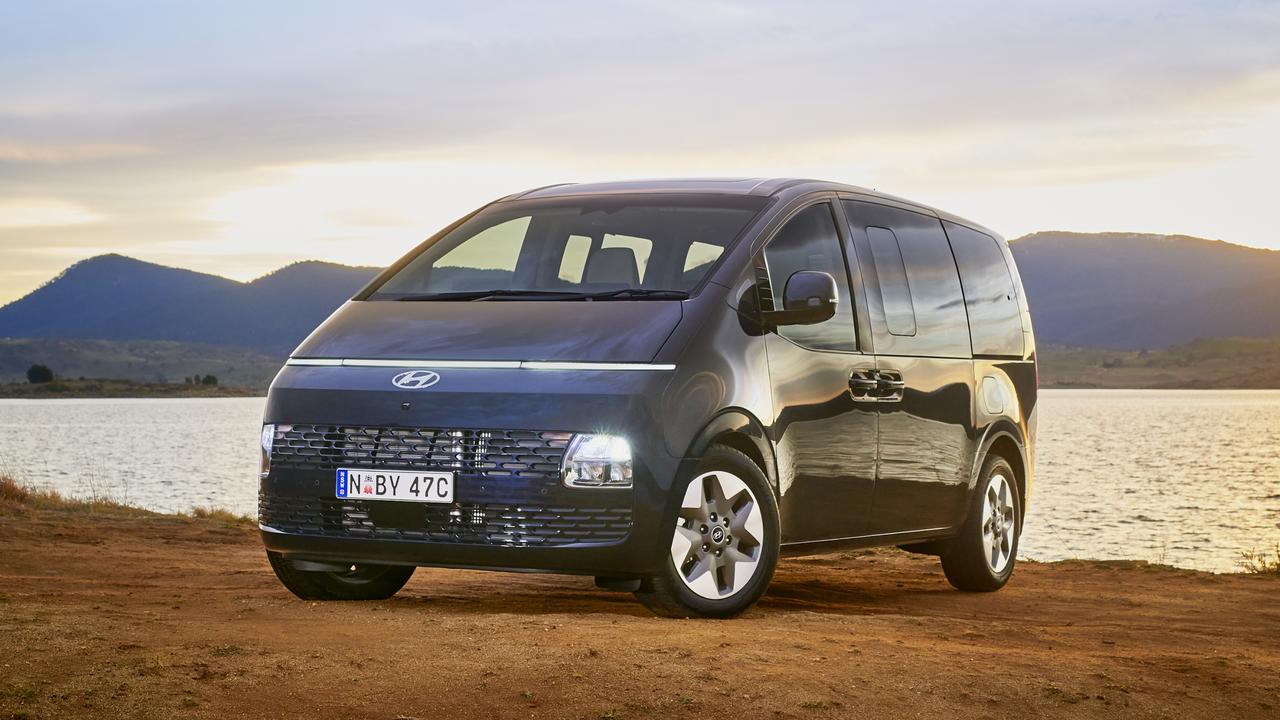 Big families on the hunt for a new car that’ll stand out in traffic should look no further than this new machine with head-turning looks.

Hyundai has replaced its ageing iMax people-mover with the futuristically styled, better equipped and pricier Staria. The family gets spoiled in the range-topping, eight-seat Highlander diesel.

Jules: Is it from the future? It looks like a spaceship.

Iain: Isn’t it magnificent? Robocop has been reincarnated as an eight-seater and it’s getting more attention than an orange Lamborghini.

Jules: Is it electric?

Iain: Petrol or diesel only for now, but Hyundai’s confirmed a hydrogen version for some markets in 2023.

Jules: It’s a giant slab of a van, but the LED light strip across its nose and giant vertical LED rear lights are wonderful. Cool wheels too.

Iain: Those rear lights are like an 80s disco floor. It’s a polarising design and ours has a sinister look about it. You expect a bunch of heavies or a SWAT team to jump from the side doors.

Jules: I’m getting hearse and airport shuttle vibes. What rivals it?

Jules: I love that Carnival. Is the Staria cheaper?

Jules: No wonder the kids call this the Party Bus.

Iain: People-movers may have a dull reputation, but any family that lives with one soon comes around. Incredible room for people and cargo.

Iain: It’s a flashy cockpit. There are two 10.25-inch screens – one for infotainment and the other above the steering wheel for speed, revs, driver info and blind-spot cameras when indicating.

Jules: A large flat panel for climate control and heat seating and cooling looks neat, but I’d love buttons and knobs instead.

Jules: I like the grippy wireless charging pad for my phone, the giant centre bin and the thousand bottle holders.

Iain: The dash and door-tops are too hard scratchy plastic for a $70,000 car, but otherwise it’s classily finished.

Iain: Unlike the old iMax, the Staria’s built on the Hyundai Santa Fe SUV’s platform. It rides surprisingly well for such a big thing, but isn’t as car-like as the Kia Carnival.

Jules: It sounds a bit “diesel van” when you floor it and there’s not much shove.

Iain: What do you expect? It’s a big lumbering bus. You can get a $3000 cheaper V6 petrol version which I’d prefer, but it’s only front-wheel-drive and will be thirsty.

Jules: It’s loaded with driver aids. The smart cruise control and lane-follow assist are brilliant for highways and traffic. But the lane-keep assist is very fussy.

Iain: It beeps if you near white lines, which is inevitable in such a big car. At least you can quickly disable it with a steering wheel button.

Iain: At least there’s a clever 360-degree birds-eye camera to help. And it has a great turning circle for such a whopper.

Jules: The auto tailgate needs plenty of space to open. A split tailgate would be less troublesome.

Iain: At least with it open you can literally walk right into the back row of seats.

Jules: The boot floor has no lip so shopping rolls around. I found it easier to put shopping in the footwells through the side doors.

Iain: I love the versatility. We used it to take two families out at once, then as a camping car. Having all-wheel-drive was reassuring on semi-flooded gravel roads.

Jules: Wet camping: not my favourite. Also, we were all really disappointed you couldn’t make a proper flat space inside for us to sleep in.

Iain: I’m surprised the seats aren’t more versatile; the Staria trails the Carnival here. With rows two and three folded our air mattress was hanging off the end, and the kids’ faces were almost on the ceiling.

Jules: I did warn you: it’s an airport shuttle rather than a holiday van. At least there’s proper space for three adults in the rearmost row of seats.

Jules: The kids loved the electric sliding doors and huge space. Third-row access is really easy with just the pull of a handle.

Iain: With the middle row folded the kids could sit in the back and have their feet up business-class style.

Iain: There’s a camera in the ceiling to keep an eye on passengers, with a live view through the dash screen. Handy for parents.

Iain: All seats slide on runners, while middle chairs recline. There’s massive, tall boot space no matter how you configure it.

Jules: With five-star safety, brilliant anti-crash tech and an airbag between the front seats it feels incredibly safe.

Iain: Service bills are a reasonable $1800 for five years, while we returned a quite thirsty 9.5L/100km.

Jules: The Staria’s eye-catching inside and out, and I’m surprised how easy and comfortable it is to drive. But it could make better use if its interior space.

Iain: The Staria’s main problem is the excellent and versatile Kia Carnival, which drives more like a car and is better designed for families. For some, the Staria’s all-wheel-drive and 2500kg towing ability trump cards will swing things Hyundai’s way.