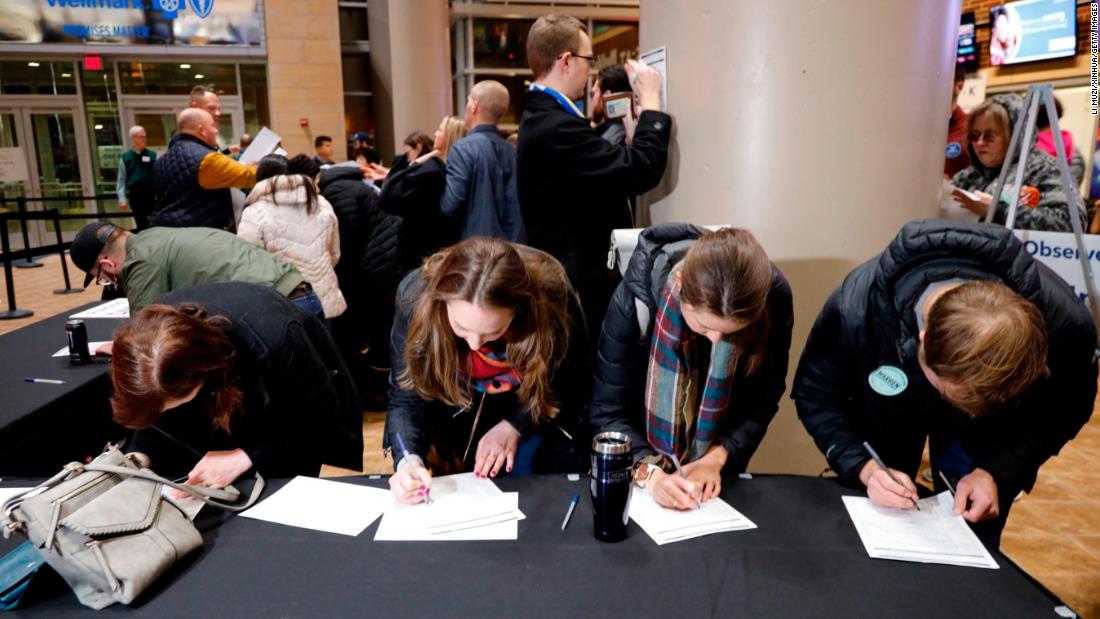 The Rules and Bylaws Committee of the Democratic National Committee, which is tasked with determining the party’s nominating process, voted last month to open up an application process for states that want to hold contests early. The criteria the committee will consider revolve around diversity, competitiveness and the feasibility of holding an inclusive early contest. In recent cycles, four states — Iowa, New Hampshire, Nevada and South Carolina — have held the first contests on the presidential nominating calendar.
Those four state organizations joined 16 others in sending letters to the DNC before Friday’s deadline, saying they intend to apply for one of the up-to-five slots for early contests. Iowa, which is largely White and voted for then-President Donald Trump by 8 points in 2020, has a complicated, time-consuming caucus system instead of a state-run primary and is expected to be most at risk of losing its early spot.

In his letter of intent, Iowa Democratic Party Chair Ross Wilburn pitched his state as an opportunity for candidates to engage in grassroots campaigning and to connect with rural voters who have been moving away from the party in recent years.

“It is crucial that potential Democratic nominees hear the voices of rural Democrats and learn firsthand about the economic, social, and cultural issues that are impacting their lives. Iowans take this role very seriously. If, as Democrats, we wish to protect and expand our electoral map, presidential candidates must continue to hear these voices,” Wilburn wrote.

While Wilburn told reporters Wednesday that Iowa Democrats aren’t looking to switch from caucuses to a primary, he said the state party is committed to reforming the process to make it simpler and more accessible.

“We’re also planning to engage with numerous stakeholders all over Iowa to explore substantive changes to the caucuses that would make them more straightforward and accessible,” Wilburn said. “It’s important to us to continue to evolve Iowa’s caucuses so that as many people as possible can participate in this proud tradition.”

With Iowa’s status in question and the DNC looking to have every region of the country represented in the early nominating group, several other Midwestern states are making their pitches to the national party, including Illinois, Michigan, Minnesota and Nebraska.

“Nebraska is in the middle of everywhere — with a mix of urban, suburban and rural voters along with an inexpensive media market — providing candidates a real opportunity to break through with grassroots campaigning that builds the party,” the state’s Democratic Party chair, Jane Kleeb, wrote in her letter.

Democrats in Georgia and Texas are also throwing their hats in the ring. In 2020, now-President Joe Biden became the first Democrat to win Georgia since 1992, and he lost Texas by 6 points.

“It is going to be critical in the 2024 election to choose states that best reflect the broad diversity of our country. Texas, with its thriving and growing diversity of ethnicity and industry, offers the competitiveness and inclusiveness that will be critical to inspiring voters across our country,” he said in a statement.

The other states that submitted letters of intent are Connecticut, Delaware, Maryland, New Jersey, New York, Colorado, Washington and Oklahoma, as well as the party organizations that represent Puerto Rico and Democrats living abroad.

States have until early June to submit their formal applications. The DNC’s Rules and Bylaws Committee will then hear presentations from selected applicants and select a group of states over the summer. That decision will then need to be approved by the full DNC.