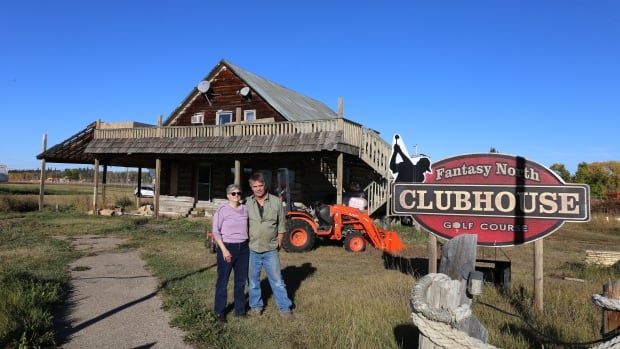 
It was early in the morning of April 27, 2020, when the Peace River, blocked by chunks of ice, started rising quickly in the northern Alberta hamlet of Fort Vermilion.

Soon it was rushing toward buildings near the river banks. As it approached their front steps, Charles LaForge and Lucille Labrecque fled to a family member’s house on higher ground.

For years, the century-old log building had been home to the couple and their businesses. Their nine-hole golf course and mini-putt courses, still covered in snow, had not yet opened for the season but their restaurant and lounge — known for burgers and poutine — were open every day except Christmas.

Within hours, water had filled the fairways and restaurant. When LaForge and his son went the next day to survey the damage, they found nearly an inch of clay and silt in the clubhouse. RCMP ordered them to leave, in case floodwater returned, and when they returned a few days later, much was ruined: floors, greens, golf carts, cookbooks, pool tables, furniture and appliances.

Like many of their neighbours, they didn’t have overland flood insurance. They had tried to buy it but their insurance company wouldn’t offer it to people in the floodplain.

Today, LaForge and Labrecque are still grappling with the aftermath.

For months, they used a ladder to reach their second-floor suite, since the stairs needed to be rebuilt. Labrecque still cooks meals on a two-burner hot plate and stores pantry items on a table. She has binders full of records related to the flood, but much remains unresolved.

“People think it’s all come and done, but it’s not,” she said.

The trauma of the flood sent Labrecque, a mental health facilitator, into weekly online counselling sessions, some of which she spent crying. Her husband dealt with his distress by tinkering with one of his old Fords. “Mustang therapy,” the couple called it.

Little did they know that dealing with the province’s Disaster Recovery Program (DRP), created to help people who have suffered uninsurable disaster-related losses, would be almost as hard.

The couple’s story illustrates the complex process of recovering from floods, which the federal government calls the most frequent natural hazard in Canada.

Hard road to getting help

In Fort Vermilion, some residents have since bought new homes and rebuilt their damaged businesses. Others are reluctant to leave the land they love, despite government urging to move to higher-elevation areas.

Residents and business owners look to Alberta’s DRP program for funds to restore what they’ve lost, but the process can be confusing, and in rural and remote communities like Fort Vermilion, more than 660 kilometres northwest of Edmonton, repairing damage can be even more challenging.

LaForge and Labrecque submitted separate DRP claims for their home and business in May 2020.

Initially, they were told their homeowner claim did not qualify but on appeal, the Alberta Emergency Management Agency (AEMA) determined in July 2021 that they were eligible for nearly $8,000.

In late 2021, they signed an agreement for about $30,000 for basic repairs to the clubhouse but the couple has been told that the cost to restore all of their business — the golf course, mini-putt course as well as the clubhouse — is estimated at $4 million.

The process itself has been a struggle for the couple for the past two years. There have been multiple caseworkers, difficulties finding contractors who would travel to Fort Vermilion to work on the property and complications around the paperwork.

Labrecque said some businesses submitted handwritten receipts or text quotes, which weren’t recognized by the program. DRP staff wanted detailed records of how frequently they had mowed grass or made repairs to the mini-golf course — work they did themselves and wasn’t documented — and, frustratingly, even told them the golf courses weren’t eligible because they were not operational at the time of the flood.

“I don’t know how many golf courses and mini-putt golf courses in Edmonton are open April 28th, but I can tell you that at the 58th parallel here, there’s none and there never is,” Labrecque said.

The couple also had to navigate required building code upgrades and a new policy restricting floodplain development from Mackenzie County, which governs much of northwestern Alberta, including the hamlet of Fort Vermilion. The new policy means no new permits will be issued for properties or rebuilds in the floodplain.

Repairs are allowed but as the couple notes, some parts of their business — like the golf course’s irrigation system — are beyond repair.

According to Municipal Affairs statistics as of Sept. 22, Mackenzie County had received $16.4 million through the DRP program following the 2020 flood, plus $11.5 million in mitigation funds to relocate residents. The average DRP amount received by a Fort Vermilion homeowner was $94,000.

Scott Johnston, the ministry’s press secretary, said all homeowner applications in the hamlet have been resolved but four small business files remain open. He said AEMA staff are working closely with residents at the golf course property “to support them through their application process.”

Labrecque and LaForge aren’t the first to find the flood recovery process frustrating.

After the catastrophic 2013 flooding in southern Alberta, an advocacy committee in High River recommended dozens of changes to the DRP program, including better communication about eligibility and reducing the number of staff involved in each application.

“For many, the DRP process itself was re-traumatizing for those who had lost so much — in some cases everything,” the 2016 report said.

The difficulties are exacerbated in small, remote communities involved in the complex and time-consuming recovery process, says Jodi Manz-Henezi, who chairs the disaster and emergency management program at NAIT.

“In a city like Calgary or Edmonton, we can call up a cleaning crew, we can get a drywaller in, we can do all those things. But in these rural and remote communities, that is not often possible,” she said.

Manz-Henezi said government recovery staff are working to improve their processes, but communities should also be trying to build resilience before floods occur by taking preventative measures and educating everyone about the risks to their homes and businesses.

She said many people affected by floods expect governments will pay for everything they lost.

That’s not realistic, she said

“We know we’re going to be experiencing more disaster events and they’re going to be significant, and so we have to think outside of the box a little bit,” she said.

In the fall of 2020, the county’s council and administration met with the province to discuss flood mitigation efforts.

“We’ve been told that the province will not keep on spending money and repairing homes and property in the floodplain — neither do I want my tax dollar or my neighbour’s tax dollar to do that,” he said.

The county is now building three new subdivisions in Fort Vermilion. Knelsen said people have moved into homes on more than 15 of the new lots and dozens more are expected to move by the end of the year.

Knelsen said the process has been challenging due to inflation and material shortages.

“The picture hasn’t been easy, but there is progress and by far and large, the feeling is that of optimism,” he said.

To move or not to move

Oxana Kabardina came to Canada with her husband as immigrants from Russia. After attending school in British Columbia, she and her husband bought a tiny bungalow in Fort Vermilion.

When they heard the flood was coming, they moved their belongings from their basement bedroom to the main floor, but the waters rose too high. Except their clothes, which had been placed in garbage bags, they lost everything: computers, letters from loved ones and photographs.

“That was hard to process,” she said.

Kabardina, who works as a nurse, quickly realized that she wouldn’t be able to get a permit to rebuild the basement, since the home was in the floodplain. She and her husband also worried about the house flooding again.

Three months after the flood, the couple moved into a mobile home not far from the hospital, on a hill overlooking the east side of town. They received a payment from the county for giving up their old home.

“My neighbours, they couldn’t even think about moving because they were born here. It’s their land. They are very attached to the land. For us, for immigrants who live a nomadic lifestyle, it’s a little bit easier to make decisions like that,” she said.

Kabardina said she still has dreams about waves and seeing water in her old home, but she has made peace with the move.

Others, though, are less keen to relocate.

“I don’t think that’s in the plan for me at this point,” said Angela Sinclair, whose home and rental property flooded. The rental house is still covered in mud.

Sinclair said dealing with the aftermath of the flood was stressful enough and she doesn’t want to start over in a new location.

“I prefer to just stay here,” she said.

Like Labrecque and LaForge, Sinclair also found the DRP process frustrating. She dealt with multiple DRP caseworkers and struggled to obtain permits and find repair workers.

Future of the floodplain

Hydway Hardware owner Ray Toeves, who had multiple businesses damaged by the flood, wiped out his savings to build a new hardware store. He found the DRP process straightforward and was able to borrow enough money to rebuild in a safer location.

Now that his businesses have reopened, he’s thinking about the future of the floodplain.

The former county councillor said he plans to spend the next few years lobbying governments to create a provincial park there.

“We could develop a tourist destination,” he said.

Labrecque and LaForge also want a say in how the land is used, but as winter approaches, they worry most about running out of time to move their house to a higher part of their property before the ground fully freezes.

“Not much is gonna happen over the next seven months,” LaForge said.

Can you change from a night owl to an early bird? Experts weigh in