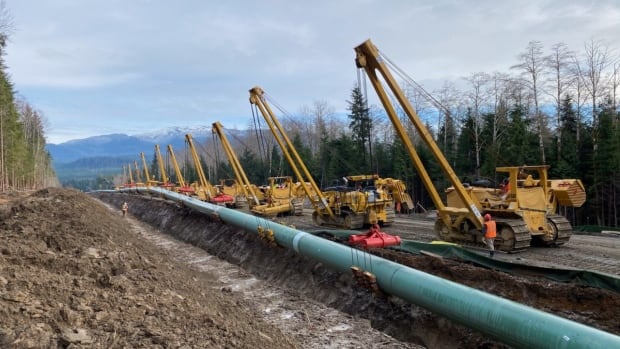 
RCMP say they are negotiating with demonstrators who have taken control of a Coastal GasLink construction site in northern B.C. as tensions surrounding the natural gas project rise again.

Protests last year against the pipeline on Wet’suwet’en First Nation territory set off rail blockades across the country.

Dawn Roberts, an RCMP spokesperson, says two people have been arrested in the past week at the site near Houston, B.C., and Coastal GasLink staff have been unable to work there since Sept. 20.

An open letter from B.C. academics addressed to the B.C. Archeology Branch criticized the Coastal GasLink work, saying the company and the provincial government failed to properly consult the Wet’suwet’en and could lead to the destruction of Indigenous artifacts.

TC Energy, which owns the project, disputed the accusations in a statement, saying it had engaged with the Office of the Wet’suwet’en and had unearthed and saved artifacts under the supervision of a trained archeologist.

Indigenous Relations Minister Murray Rankin said the pipeline project has been approved by elected Indigenous leaders and the provincial government is working with hereditary chiefs to come to an agreement about rights and titles.

The 670-kilometre Coastal GasLink pipeline was approved by both the province and all 20 elected First Nations councils along its path to transport natural gas from northeastern B.C. to a processing and export facility on the coast in Kitimat.

However, Wet’suwet’en hereditary chiefs claimed the project had no authority without consent through their traditional system of governance, inspiring supporters across the country to act in solidarity.

The open letter, signed by 25 archeology professionals and academics from Canada and the U.S., says the work and alleged damage at the Lamprey Creek site could have a large effect on future studies and consultation with the Indigenous groups would have shown that.

“You would have realized that the destruction of archeological resources — non-renewable resources — … will result in the erasure of much of the context associated with Ts’elkay Kwe Ceek cultural landscape,” the letter said of the traditional name for the territory where the work is being done.

TC Energy’s statement said it is has worked with Indigenous communities and representatives to ensure work can be done safely.

“Coastal GasLink has engaged with Indigenous communities, to ensure open and constructive dialogue to protect Indigenous values and cultural heritage,” the company said.

NRL Grand Final 2021: Crowd capacity, what impact is Covid-19 having