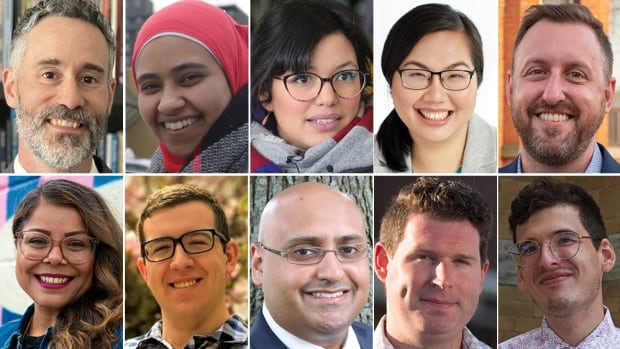 
The new crop of elected officials in Hamilton promised to set a new tone in how the city is governed — some of them aren’t waiting to be sworn in to start.

Five elected councillors and five elected public school board trustees, along with four people who ran in the municipal election, issued a joint statement Thursday, saying they’re refusing to speak to the Hamilton Spectator over news coverage they call “dehumanizing” and “framed in a way that contributes to anti-Black racism.”

The Hamilton Spectator, which launched in 1846, is open to feedback but defends its coverage, according to editor-in-chief Paul Berton.

The joint statement from the newly elected officials, most of whom were elected for the first time Monday, is co-signed by 14 people, representing almost half of the city’s incoming public school board trustees and over a quarter of the new city council.

“We are refusing to speak to the Spectator, going forward, until it takes steps to acknowledge the harm it has caused, apologizes to those impacted, and comes up with an action plan that both addresses our concerns and is accountable to the communities and individuals who have been harmed by its actions,” read the statement, which comes four days after the municipal election.

Karen Bird, a political science professor at McMaster University, said she’s not sure there’s a precedent for something like this in Hamilton before.

“Those that signed this are clearly making it known quite quickly they’re going to do things differently … it’s a sign anti-Black racism will be a priority,” she said.

Many of those who signed the letter shared additional personal reasons on social media of why they supported the measure.

“During my campaign, I made it clear that I’m an ally for marginalized members of our community. These are not empty words,” said Cassar.

“As a new Councillor I promised to serve our ward; be a voice, advocate, and ally to all those in our community,” said Hwang.

“I wish it didn’t have to begin this way, but I was not voted in only to be silent,” said Noble.

The statement says a recent article in the newspaper prompted the letter — one about Hamilton police arresting a fourth person after a deadly home invasion and kidnapping last year.

The statement mentions at least one other article published in the newspaper that, the group said, has made them feel “deeply concerned” that “racist views, especially anti-Black views, will continue to be given a platform in print media.”

Other news outlets, including CBC Hamilton, also reported on the police charges related to the kidnapping.

On Oct. 20, Hamilton Police Services issued a press release that they had made another arrest in the case. The accused, who was charged with adult kidnapping, had worked with a range of community organizations in recent years, and the Spec article published that same day named two of those organizations — Hamilton Centre for Civic Inclusion (HCCI) and Hamilton Students for Justice (HS4J) — in its third paragraph. It also mentioned in its first sentence the accused’s support for defunding police services.

The joint statement said the group believes The Spec story “perpetuated stereotypes, and vilified community organizing, including the excellent work being done by HCCI and HS4J,” and that its publication “is reflective of a journalistic practice that has perpetuated anti-Black racism in reporting.”

Berton, from The Spec, told CBC Hamilton in an emailed statement the team is “open to feedback, and we endeavour to learn from it” and says the paper “has been a voice of inclusion and respectful engagement in our community, and it will continue to strive to be so.

“In this instance, we have reviewed the article in question and believe the information and context is both accurate and relevant,” he wrote.

“At the heart of this story was a home invasion in which an innocent member of our community lost his life. Charges and suspects in that crime are a matter of legitimate public interest, reflected in the fact that multiple media organizations published the story.”

Two candidates who were running for election Monday are associated with HCCI and HS4J. The joint statement from elected officials said, as a result of the article, people “weaponized” the story against Ward 14 candidate and former HCCI executive director Kojo Damptey, and Ward 8 and 14 public school board trustee candidate Ahona Mehdi in the lead up to the election.

At least two people running in Ward 14 shared coverage of the police charge.

Ward 14 councillor-elect Michael Spadafora, who beat Damptey by 79 votes, shared The Spec story on Twitter with one word: “Interesting.”

Becky Buck, who is now Ward 8 and 14 public school board trustee-elect, shared an article written by the Bay Observer, adding that she knew the victims and that it “is starting to look like there will be justice” for them.

What does this mean for the new council?

Sonya Fatah, an assistant professor in Toronto Metropolitan University’s School of Journalism who lives in Hamilton, says the group’s actions are a conversation starter for making change inside institutions like media organizations and the city.

She said the criticism can offer some reflection on improving diversity in newsrooms, but also said it shows a possible change coming to city hall.

“I think we have a number of people here who don’t want to stick with the status quo and I think that can be a good thing,” she said, adding some new council members seem eager to take action beyond performative measures like statements or land acknowledgements.

“You have a diverse group of people who are putting this statement out.”

With no political parties at the municipal level, Bird says a councillor’s lived experience may play a larger role in how they vote on issues. She cited research which suggests diversity can play a factor when discussing issues that don’t have a public consensus because it allows for more and new ideas to be considered.

The makeup of the new council — which will be sworn in Nov. 15 — is different than the previous, with a few more councillors who identify from marginalized communities.

Bird says it’s too soon to know what other areas this group will work on together, however.

“[The statement might] make people think these are the kinds of alliances that exist and that these alliances can predict … other issues. I think it’s far too early to know what that means,” she said.

“Yes we have a very new council, a lot of progressive councillors-elect, but they’re not necessarily going to agree on all issues … they’re elected in different wards to represent different kinds of interests.”

Parents of younger children, how are you dealing with RSV and the flu?

Officer fired for drinking on the job, officials say